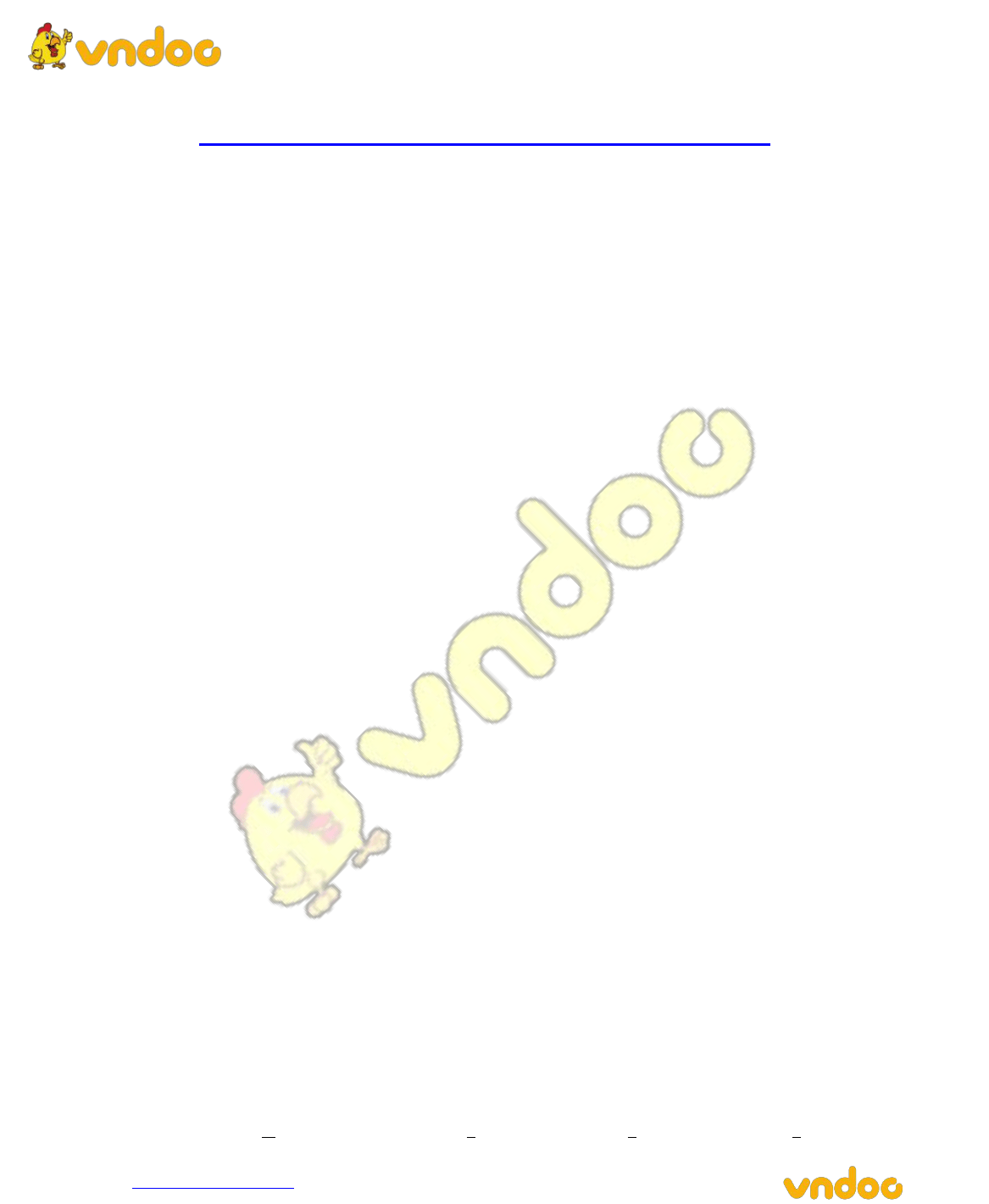 Thư viện Đề thi - Trắc nghiệm - Tài liệu học tập Miễn phí
Trang chủ: https://vn doc.c om/ | Email hỗ trợ: hotro@vndoc.com | Hotline: 024 2242 6188
ĐỀ THI THỬ THPTQG MÔN TIẾNG ANH
NĂM 2020 CÓ ĐÁP ÁN
Read the following passage and mark the letter A, B, C or D on your answer sheet to indicate
the correct word or phrase that best fits each of the numbered blanks from 1 to 5.
21
st
century teachers need to serve as a guide or mentor for their students, not as the all-
knowing sage providing them with everything they need. Nowadays, with so (1) ______ access
to resources of all kinds, children invariably know more than teachers on different topics, step
ahead of the technology.
Teachers need to be empowered as facilitators for learning, so that they can empower
their students in (2) ______. This shift is great news for teachers. Instead of struggling to give
kids all the information in areas (3) ______they know little about, teachers can support students
as they make their own steps into different fields. It’s about preparing them to go beyond their
seniors, ensuring they have the skills to do it, and assisting them along the way. (4) ______,
teachers need to be forward-thinking, curious and flexible. They must be learners: learning new
teaching methods, and learning alongside their students. Simply asking questions like “What
will my students need dozens of years from now?” or “How can I help give them those skills?”
can change teachers' (5) ______, make them a leader, and bring about changes in the classroom,
school and community.
Question 1: A. little B. much C. many D. few
Question 2: A. line B. sight C. use D. turn
Question 3: A. whom B. what C. where D. that
Question 4: A. For instance B. Otherwise C. In practice D. Therefore
Question 5: A. mindset B. knowledge C. judgement D. prejudice
Mark the letter A, B, C or D on your answer sheet to indicate the word whose underlined part
differs from the other three in pronunciation in each of the following questions.
Question 6: A. phones B. maintains C. knocks D. stays Thư viện Đề thi - Trắc nghiệm - Tài liệu học tập Miễn phí
Trang chủ: https://vn doc.c om/ | Email hỗ trợ: hotro@vndoc.com | Hotline: 024 2242 6188
Question 7: A. idiom B. idle C. ideal D. item
Read the following passage and mark the letter A, B, C or D on your answer sheet to indicate
the correct answer to each of the questions from 8 to 12.
A major American bank is being sued by the US authorities for allegedly discriminating
against its female employees. It has been alleged that women in the firm do not have as good
promotion prospects as the men. Sexism in the workplace is against the law in America and in
many other countries. However, there are still obstacles in many firms which prevent women
from achieving the promotion that their talents and qualifications deserve.
Many women are promoted quite rapidly through the junior jobs in a firm, but face the
glass ceiling, when they apply for any of the most senior posts. Many women blame this
situation on the old-boy network. Others see it as evidence that many men are resistant to
change and are still chauvinists at heart, while some may feel that failure to promote women to
top jobs is a result of feelings of insecurity in the men who are making the appointments.
Perhaps they are afraid of letting women become too powerful. Before the rise of the women’s
movement there were no such things as equal rights or equal opportunities for women. For the
most part, women were expected to get married and then be responsible for childcare and for
carrying out all the household tasks. If they worked, it was probably in a part time, often rather
menial job.
Feminist saw this as sexism and a waste of women’s talents, and set out to change things.
Although some people, women as well as men, now do not have a high regard for feminism,
women owe to feminists many of the improvements in their work situation. Without them,
there would be no positive discrimination, no job-sharing and no parity with men in the
workplace.
Question 8: What could be the best title of the passage?
A. Gender discrimination B. Sex Equality
C. Jobs for Women D. Men and Women
Question 9: Which of the following is NOT mentioned as a reason for sexism at the