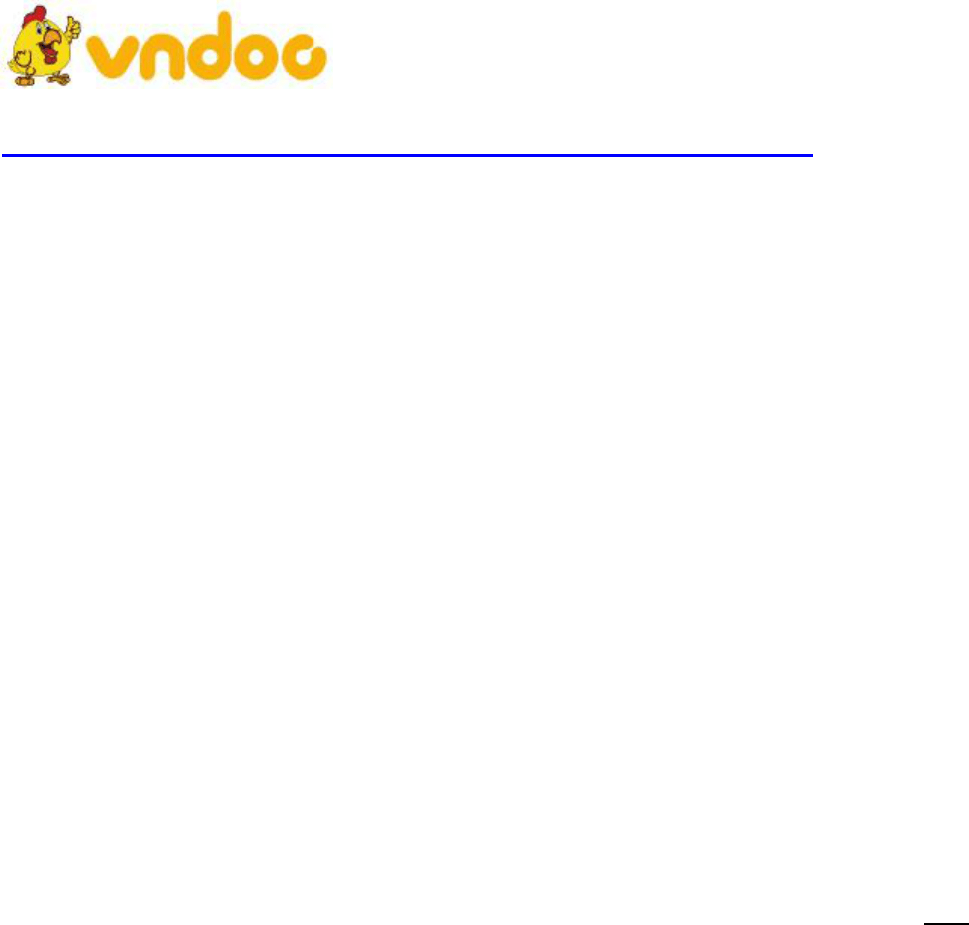 VnDoc - Tải tài liệu, văn bản pháp luật, biểu mẫu miễn phí
ĐỀ THI THỬ THPT QUỐC GIA MÔN TIẾNG ANH NĂM 2019
MÔN TIẾNG ANH CÓ ĐÁP ÁN
Mark the letter A, B, C or D on your answer sheet to indicate the word that differs
from the other three in the position of the primary stress in each of the following
questions.
Question 1: A. valuable B. variety C. environment D. impossible
Question 2: A. social B. common C. verbal D. polite
Read the following passage and mark the letter A, B, C or D on your answer sheet to
indicate the correct answer to each of the questions.
By adopting a few simple techniques, parents who read to their children can considerably
increase their children’s language development. It is surprising, but true. How parents talk to
their children makes a big difference in the children’s language development. If a parent
encourages the child to actively respond to what the parent is reading, the child’s language
skills increase.
A study was done with two or three-year-old children and their parents. Half of the thirty
children participants were in the experimental study; the other half acted as the control group.
In the experimental group, the parents were given a two-hour training session in which they
were taught to ask open-ended questions rather than yes-no questions. For example, the
parent should ask, “What is the doggy doing?” rather than, “Is the doggy running away?”
Experimental parents were also instructed how to expand on their children’s answer, how to
suggest alternative possibilities, and how to praise correct answers.
At the beginning of the study, the children did not differ on levels of language development,
but at the end of one month, the children in the experimental group were 5.5 months ahead
of the control group on a test of verbal expression and vocabulary. Nine months later, the
children in the experimental group still showed an advance of 6 months over the children in
the control group. 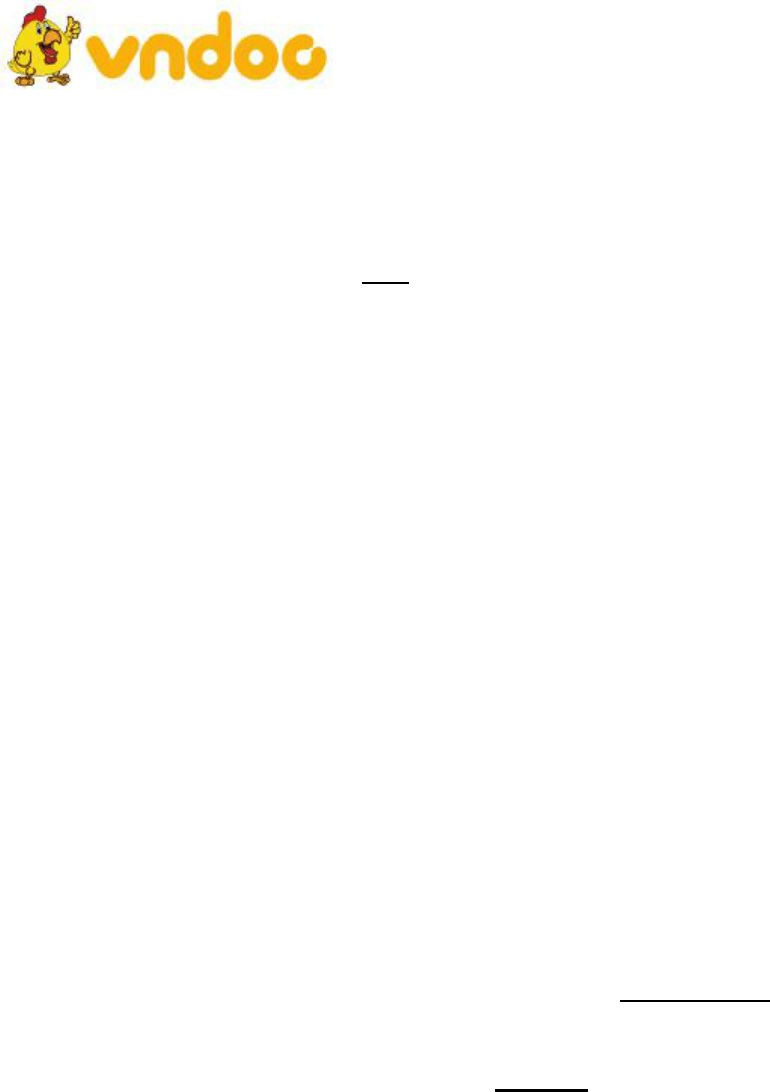 VnDoc - Tải tài liệu, văn bản pháp luật, biểu mẫu miễn phí
Question 3: Parents can give great help to their children’s language development by______
them.
A. reading to B. responding to C. adopting D. experimenting
Question 4: What does the word “they” in the second paragraph refer to?
A. Participants B. Parents C. Questions D. Children
Question 5: During the training session, experimental parents were taught to______.
A. study many experiments B. give correct answers
C. ask open-ended questions D. use yes-no questions
Question 6: What was the major difference between the control group and the experimental
one in the study?
A. The number of participants B. The age of the children
C. The training that parents received D. The books that were read
Question 7: What conclusion can be drawn from this passage?
A. Children’s language skills increase when they are required to respond actively.
B. Children who read actively always act six months earlier than those who don’t.
C. Two or three-year-old children can be taught to read actively.
D. The more children read, the more intelligent they become.
Mark the letter A, B, C or D on your answer sheet to indicate the word(s) OPPOSITE
in meaning to the underlined word(s) in each of the following questions.
Question 8. I’m sorry I can’t come out this weekend – I’m up to my ears in work.
A. bored B. scared C. free D. busy
Question 9: Workers are always advised to be cautious when entering and leaving the place
due to a recent fire.
A. factual B. unfriendly C. careless D. ambitious
Mark the letter A, B, C or D on your answer sheet to indicate the correct answer to
each of the following questions.
Question 10: Each of us must take ________ for our own actions.
A. responsibility B. possibility C. probability D. ability

VnDoc - Tải tài liệu, văn bản pháp luật, biểu mẫu miễn phí
Question 11: Her fiancé is said _______ from Harvard University five years ago.
A. to have graduated B. to be graduated C. being graduated D. having graduated
Question 12: I can’t think of any possible _______ for his absence.
A. exploration B. explanation C. expedition D. expectation
Question 13: Housewives find it easier to do domestic chores thanks to _______ invention
of labour saving devices.
A. an B. some C. the D. a
Question 14: My supervisors is angry with me. I didn’t do all the work I _______ have done
last week.
A. should B. may C. need D. must
Question 15: Some films about violence have badly _______ children and teenagers.
A. influenced B. aimed C. taken D. offered
Question 16: People should not have children unless they are _______ to being responsible
parents.
A. promised B. involved C. allowed D. committed
Question 17: Ms. Brown asked me _______ in my class.
A. were there how many students B. how many students there were
C. there were how many students D. how many students were there
Question 18: With greatly increased workloads, everyone is _______ pressure now.
A. under B. out of C. above D. upon
Question 19: As there were too many participants at the seminar, the main speaker _______
them into four smaller groups for discussion.
A. divided B. submitted C. enrolled D. provided
Question 20: Hurry up or you _______ the first lesson.
A. had missed B. miss C. have missed D. will miss
Question 21: Her first novel has been _______ acclaimed as a masterpiece.
A. nation B. international C. internationally D. national
Question 22: I _______ along the street when I suddenly heard footsteps behind me.