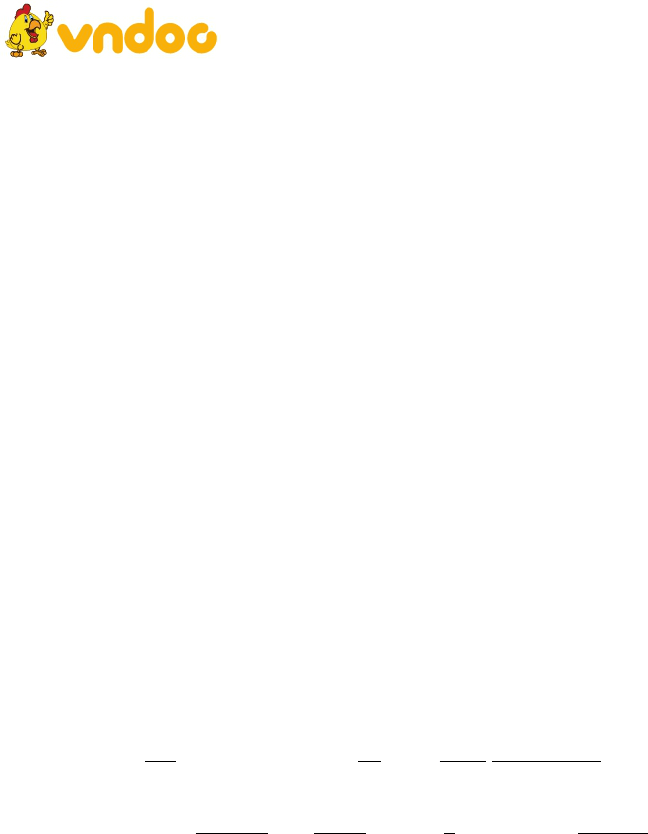 VnDoc - Tải tài liệu, văn bản pháp luật, biểu mẫu miễn phí
A. would have B. had C. have got D. have
Câu 20: They didn’t finish the project on time, ________?
A. did they B. don’t they C. do they D. didn’t they
II. Chọn câu (ứng với A, B, C hoặc D) có nghĩa gần nhất với câu cho trước trong các câu từ 21 đến 23.
Câu 21: That factory is producing more and more pollution.
A. More and more pollution is produced by that factory.
B. More and more pollution is being produced by that factory.
C. Pollution is produced by that factory more and more.
D. Pollution is producing by that factory more and more.
Câu 22: “I am working in this company,” she said.
A. She said that she is working in this company.
B. She said that she was working in that company.
C. She said that she was working in this company.
D. She said that I am working in that company.
Câu 23: It’s two years since Mai last wrote to me.
A. Mai didn’t wrote to me for two years. B. Mai wasn’t written to me since two years.
C. Mai hasn’t written to me for two years. D. Mai wouldn’t write to me since two years.
III. Chọn từ/ cụm từ gạch dưới (ứng với A, B, C hoặc D) cần phải sửa trong các câu từ 24 đến 25.
Câu 24: What did you do if you met an alien from outer space?
A B C D
Câu 25: He used to coming late when he was a high school student.
A B C D
IV. Đọc kỹ đoạn văn sau và chọn phương án trả lời đúng (ứng với A, B, C hoặc D) cho mỗi câu hỏi từ 26
đến 30.
The large movement of earth under the water causes a very large and powerful tsunami. The
tsunami was called the Asian Tsunami in most of the world. It was called the Boxing Day Tsunami in
England, Australia, South Africa and Canada because it happened on the holiday they call Boxing Day.
The tsunami caused a lot of damage to countries such as the Philippines, Thailand, Indonesia and Sri
Lanka.
Waves as high as 30m killed many people and damaged or destroyed a lot of buildings and other
property. Over 225,000 people died or were not found after the tsunami. The wave traveled as far as
South Africa (8000km) where as many as 8 people died because of high water caused by the wave.
Because of how much damage was caused and the number of people the earthquake affected, over US$7
billion was donated to help the survivors and to rebuild the areas damaged.
Câu 26: Why was the tsunami called the Boxing Day Tsunami in England?
A. Because it happened when people were boxing.
B. Because it happened when people were collecting boxes.
C. Because it happened on Boxing Day.
D. Because it destroyed a lot of boxes.
Câu 27: How high were the waves?
A. thirteen meters B. eighteen meters
C. thirty meters D. two hundred and twenty five meters. 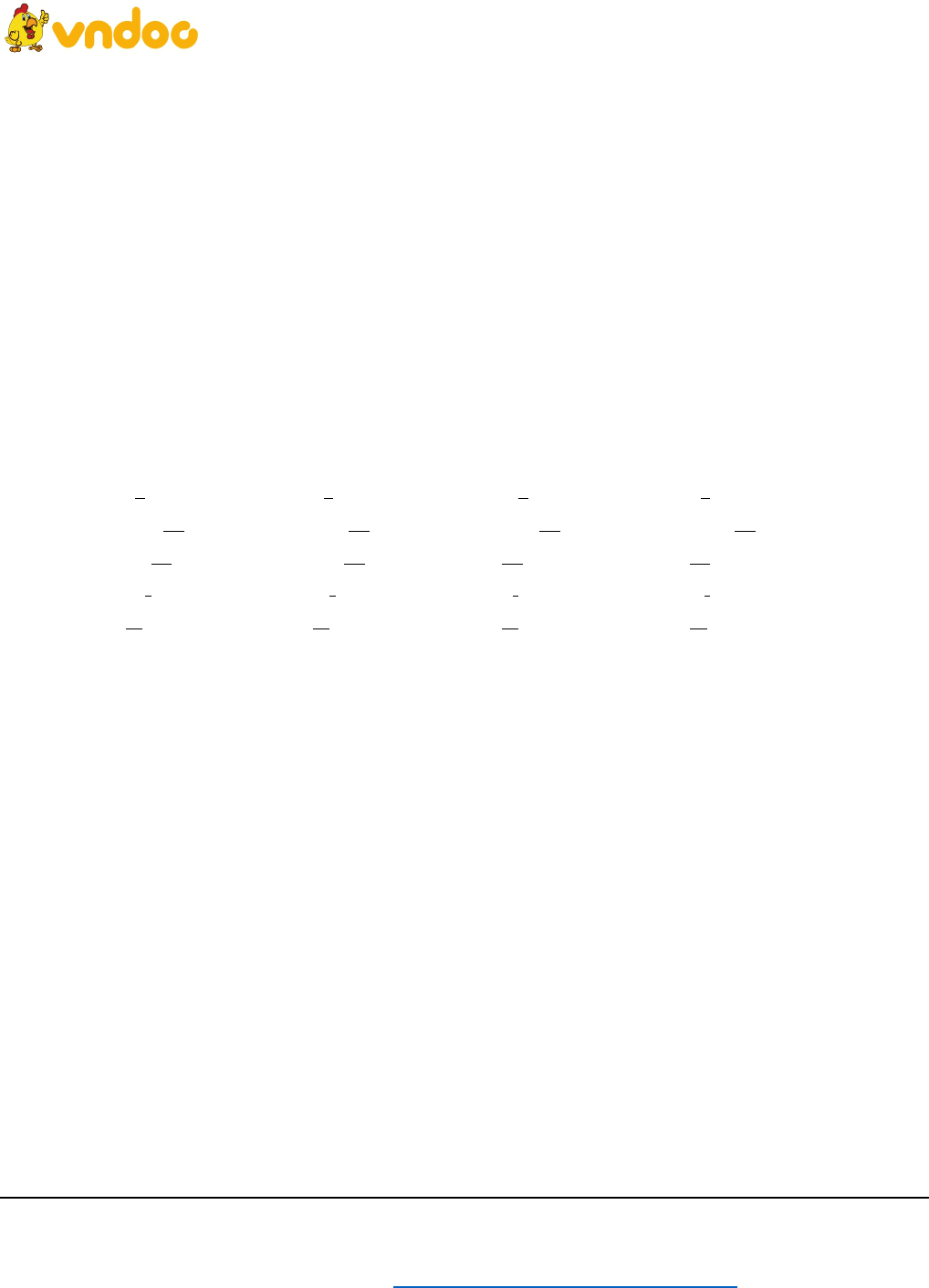 VnDoc - Tải tài liệu, văn bản pháp luật, biểu mẫu miễn phí
Câu 28: What were some people in South Africa killed by?
A. earthquake B. high water C. high wind D. property
Câu 29: What does the word ‘survivors’ in the passage mean?
A. people who were dead B. people who are left alive
C. houses which aren’t destroyed D. offices which are rebuilt
Câu 30: All of the following statements are true EXCEPT _________.
A. Only in Asia the tsunami called Asian Tsunami
B. The tsunami caused a lot of damage to Indonesia
C. Many people died because of the high waves
D. A lot of money was raised to help people
V. Chọn từ có phần gạch chân phát âm khác với phần gạch chân của những từ còn lại trong các câu từ 31
đến 35.
Câu 31: A. cat B. bag C. map D. ball
Câu 32: A. visited B. posted C. landed D. washed
Câu 33: A. teaching B. watches C. charity D. chemistry
Câu 34: A. skill B. mind C. give D. still
Câu 35: A. think B. thank C. though D. through
VI. Đọc kỹ đoạn văn và chọn phương án đúng (ứng với A, B, C hoặc D) cho mỗi chỗ trống từ câu 36 đến
câu 40.
In Western countries, electricity, gas, and water (36)_____ not luxuries but necessities.
Companies now realize that consumers want products that will not only work effectively, (37)_____ also
save money.
For most North American households, lighting accounts (38)_____ 10 percent to 15 percent of the
electricity bill. (39)_____, this amount can be reduced by replacing an ordinary 100-watt light bulb with
an energy-saving bulb. These bulbs use a quarter of the electricity of standard bulbs and last eight times
longer. Therefore consumers can save about US$7 to US$21 per bulb.
In Europe, there is a labeling scheme for refrigerators, freezers, washing machines and tumble
dryers. The label tells the consumers (40)_____ energy efficiency each model has, compared with other
appliances in the same category.
Câu 36: A. is B. were C. was D. are
Câu 37: A. and B. as C. so D. but
Câu 38: A. as B. on C. with D. for
Câu 39: A. However B. Even though C. Although D. Therefore
Câu 40: A. how much B. how many C. how D. what
___________THE END____________
Mời các bạn tham khảo các bài tiếp theo tại: https://vndoc.com/luyen-thi-vao-lop-10