VnDoc - Tải tài liệu, văn bản pháp luật, biểu mẫu miễn phí
ĐỀ TUYỂN SINH LỚP 10 MÔN TIẾNG ANH
CÓ ĐÁP ÁN NĂM 2020 - 2021
I. MULTIPLE CHOICE: (8 points )
Choose the word whose stress pattern is differently from that of the other.
1. A dynamite B. institute C. hamburger D. opinion
2. A minority B. communicate C. celebration D. efficiency
Read the following passages and choose the best answer for each blanket.
Rivers all of the world’s most important natural resources. Many cities are on large
rivers, and__________ every country has at least one river that plays an important part in
the lives if its people.
Besides transportation, rivers _________ food , water for crops , water to drink and
opportunities for recreation for people who live along their bank and in order to get water
for crops engineer sometimes build a dam__________ a river and let the water become a
lake behind the dam. Then people can use their water not only to irrigate fields but also to
make electricity for home and industries.
However the water often becomes__________ when cities on river bank grow inside
and the number of industries increases. We are learning that it is necessary to keep rivers
clean if we want to enjoy the ________ of the natural resources.
3. A many B. a lot C. plenty D. almost
4. A. provided B. support C. assist D .create
5. A. over B. across C. among D. under
6. A. crowed B. overloaded C. polluted D. excited
7. A. interests B. benefits C. tips D. receipts
Read the following passage and choose the best answer for each question.

VnDoc - Tải tài liệu, văn bản pháp luật, biểu mẫu miễn phí
Tigers are one of the most powerful and graceful animals in the world. The
different species that still exist today, namely the Bengal, Indochina, Siberian, South
China and Sumatra tigers are in danger of becoming extinct. Due to irresponsible hunting,
the Bali, Caspian and Java tigers have already become extinct. This could soon happen to
the other species too.
In the past, tigers were considered as pests. With a smaller area to hunt, as man
had taken up more of the land to build upon, the tigers found less area for themselves to
hunt. They thus turned to farms to get their food. Farmers’ livestock were attacked by
these tigers. People were then encouraged to hunt and kill these animals with the promise
of rewards. Even after the threat of tigers on livestock was over, man continued to hunt
tigers, this time for recreation. Poachers too hunt tigers for their body parts knowing that
the skin of tigers is much sought after. Bones and other organs are also used as
ingredients in traditional Chinese medicine. Although killing is illegal, it is still being
carried out unless it is stopped, the remaining species of tigers will soon become extinct
too.
8. How many species of tigers were there originally?
A. three
B. Four
C. Five
D. eight
9. There were fewer hunting grounds for the tigers because _____
A. man had occupied the land
B. the farmers put their livestock there
C. the tiger population was becoming bigger
D. they liked hunting livestock
10. Man continues hunting tigers even they are no longer pests because _____ 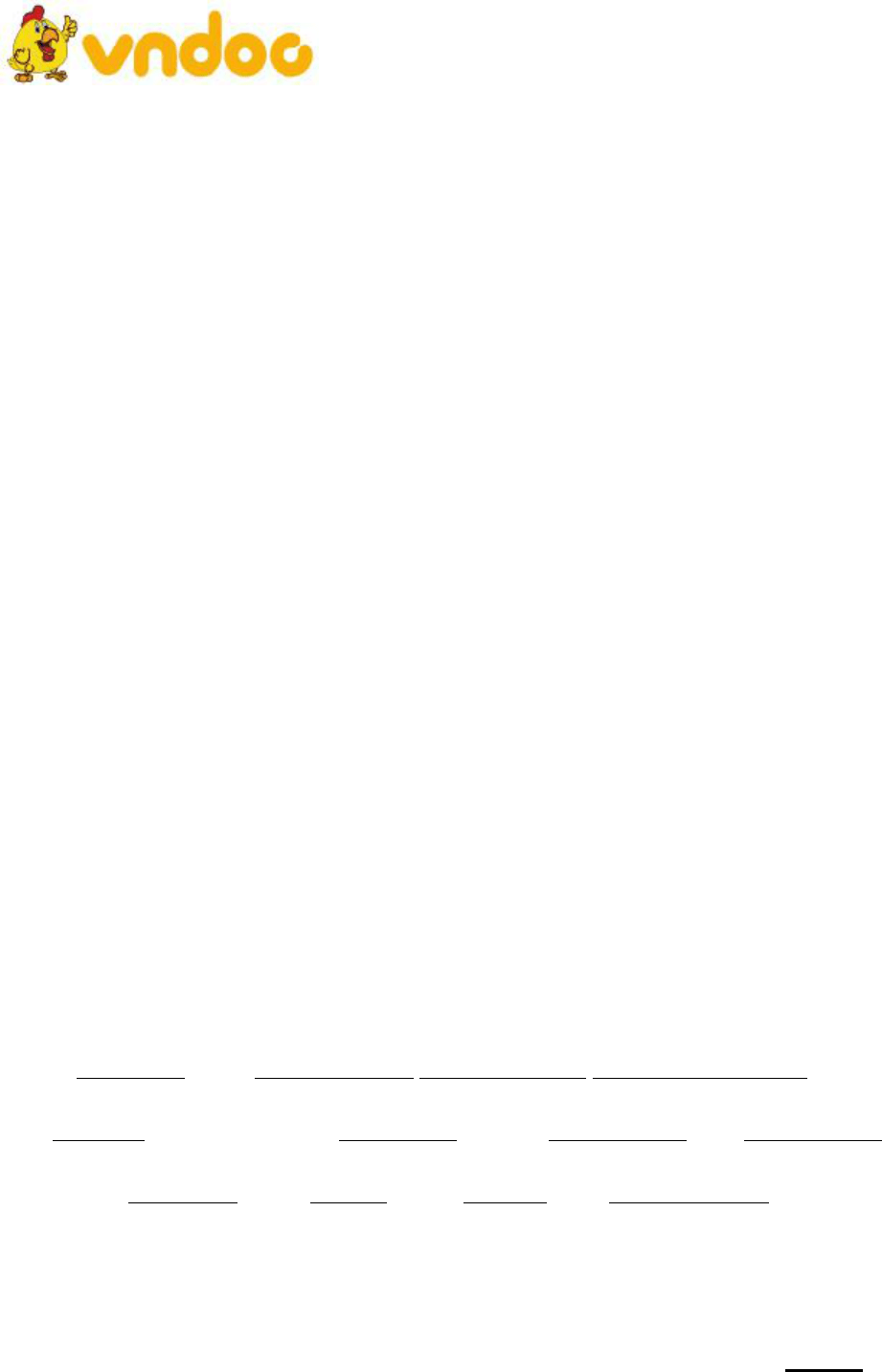 VnDoc - Tải tài liệu, văn bản pháp luật, biểu mẫu miễn phí
A. he treats it as a form of recreation
B. he loves tigers very much
C. he still thinks tigers are pests
D. he wants to make the tigers extinct
11. Poachers are people who _____
A. look after tigers
B. make Chinese medicine
C. hunt tigers illegally
D. hunt tigers’ body parts
12. Illegal poaching will _____
A. cause the extinction of tigers
B. increase the amount of Chinese medicine
C. increase the amount of Chinese medicine
D. increase the price of body parts
Find a mistake in the four underlined parts of each sentence.
13.The cost of (A) living has gone up (B) considerably (C) the last few years (D)
14. I think (A) your garden needs to weed (B) and you had better (C) do it right now (D)
15. Can you tell me (A) where that (B) apples over (C) there come from (D)?
Mark the letter A, B, C, D to indicate the word or phrase that is CLOSEST in
meaning to the underlined part .
16. Around 150 B.C. the Greek astronomer Hipparchus developed a system to classify
stars according to brightness.