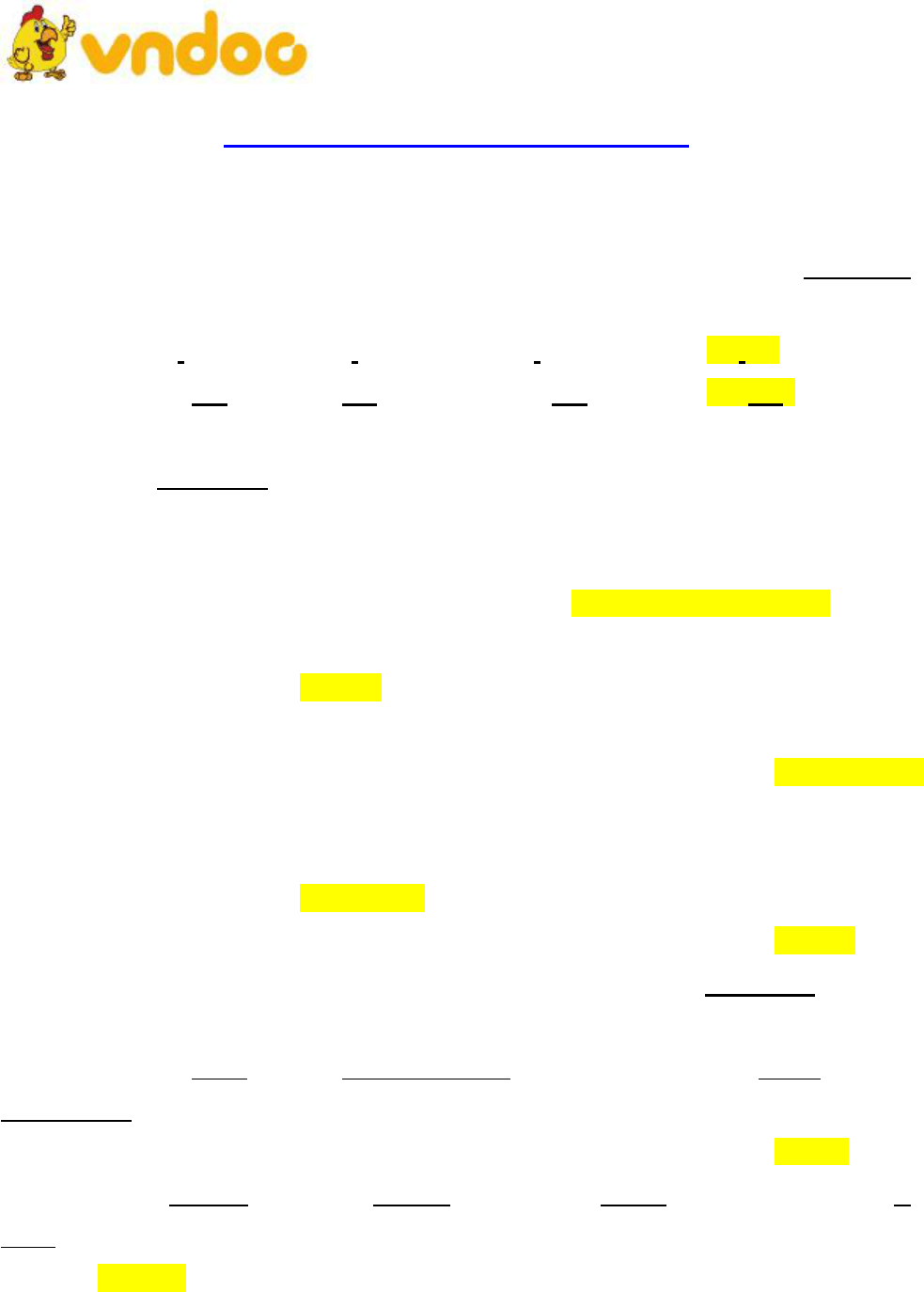 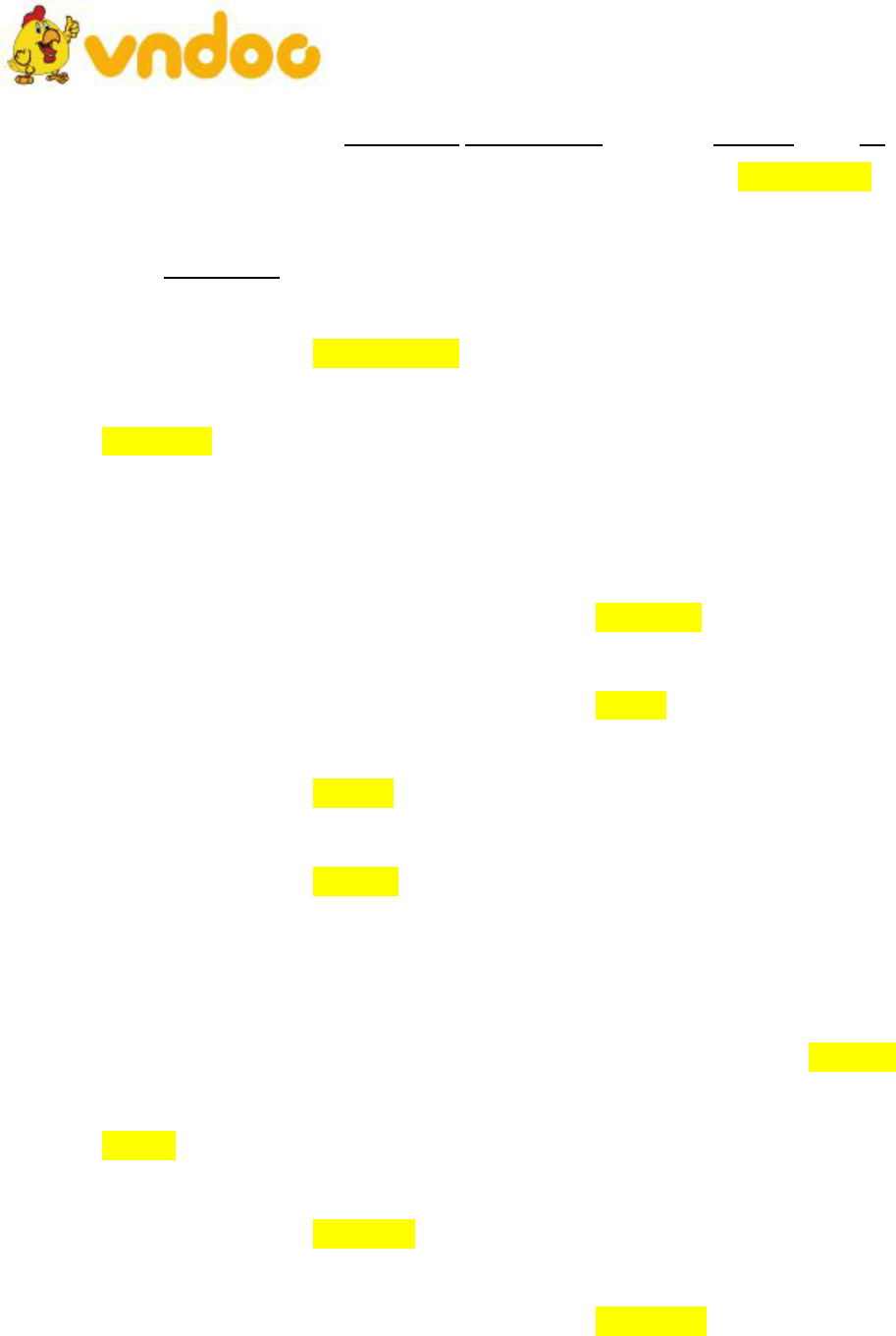 VnDoc - Tải tài liệu, văn bản pháp luật, biểu mẫu miễn phí
Question 10: She wishes that we didn’t send her the candy yesterday because she’s on a diet.
A. on B. because C. her the candy D. didn’t send
Mark the letter A, B, C, or D on your answer sheet to indicate the word(s) OPPOSITE in
meaning to the underlined word(s) in each of the following questions.
Question 11: Out of the blue, he asked me to come with him to Europe.
A. Increasingly B. As I expected C. Politely D. As I prepared
Question 12: Through thick and thin, he’s proved a faithful friend.
A. betraying B. unselfish C. unbelievable D. unloyal
Mark the letter A, B, C, or D on your answer sheet to indicate the correct answer to each
of the questions.
Question 13: We_______ you'll be at the meeting tomorrow. Is that right?
A. assess B. resume C. presume D. estimate
Question 14: He rarely lets his_______ down, especially with people he's only just met.
A. protection B. security C. guard D. safety
Question 15: I know she lives in London but I haven't got her_______ address.
A. particular B. actual C. unique D. real
Question 16: Last year the economy was stable but the_______ situation is quite different.
A. usual B. current C. actual D. unique
Question 17: I was quite taken_______ by his criticism of me. He's never done that before.
A. away B. over C. up D. aback
Question 18: At the_______ time we're working hard to solve the problems.
A. usual B. actual C. common D. present
Question 19: As_______ Jenny was late for school. She always oversleeps.
A. usual B. regular C. typical D. individual
Question 20: I don’t have anything in_______ with her. She's quite different from me.
A. ordinary B. common C. usual D. same
Question 21: Do you want to do anything in_______ today?
A. typical B. actual C. particular D. common

VnDoc - Tải tài liệu, văn bản pháp luật, biểu mẫu miễn phí
Question 22: Ken has decided to_______. He’s leaving the UK to go and live in Australia.
A. emigrate B. emerge C. immigrate D. integrate
Question 23: We went on a business_______ to Berlin last week.
A. journey B. voyage C. holiday D. trip
Question 24: That necklace is_______ . There's no other like it in the world.
A. particular B. alone C. individual D. unique
Read the following passage and mark the letter A, B, C, or D on your answer sheet to
indicate the correct answer to each of the questions.
THE FUTURE OF ENTERTAINMENT
More than ever, media is separating into mass market blockbusters on the one hand
and ‘niche’ products - attracting small groups of people with similar interests - on the other.
Everything else is struggling to compete.
Joe Swanberg makes films about the romantic lives of young people in the city. He
shoots quickly with a digital camera and asks actors to wear their own clothes. His low-
budget films are hardly ever shown in cinemas. By keeping his costs down and distributing
digitally, Mr Swanberg is making a living.
Technology was expected to help young people like him. A few years ago it was
predicted that the internet would vastly increase the supply of small independent films and
other niche media products and increase their audiences. That has certainly happened.
However, so has the opposite. Blockbusters are also tightening their grip on audiences,
whether it’s in the area of film, music, television or books. The growth of both niche
products and huge sell-out successes has been at the expense of the things in the middle
which are just quite popular - the near-misses.
There are several reasons why big hits still do so well. As in the past, people still
want to have something to talk about with their friends. Which is why talent shows such as
‘American Idol’ do pretty much as well as they did ten years ago and why the latest
blockbuster still breaks new records at the box office. Research shows that people still
choose blockbusters more often than less well-known books and films. This is probably