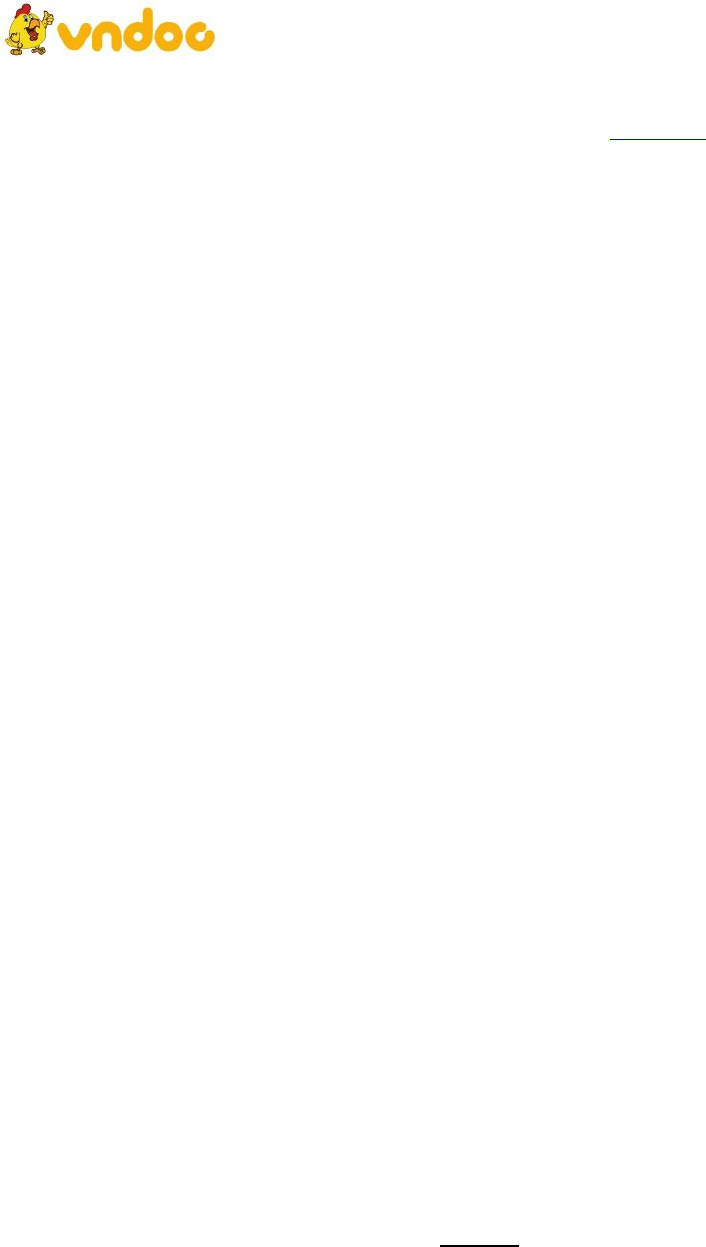 VnDoc - Tải tài liệu, văn bản pháp luật, biểu mẫu miễn phí
Hong Thai High School
Full
name:…………………......
Class:………….
WRITTEN TEST No 2
Grade 12
Time allowed: 45mins
Choose the best answer (A, B, C, or D) to complete the following sentences
1. Schooling is _______ for all English children from the age of six to sixteen.
A. optional B. pioneer C. compulsory D. plastically
2. A school year in Vietnam usually _______ in September and _______ in May.
A. begins/ ends B. starts/ last C. ends/ starts D. departs/ starts
3. If I _______ a typewriter now, I_______ this contract by myself.
A. have/ would type B. have/ will type
C. had/ would type D. had had/ would have typed
4. If you_______ more slowly, he might have understood you.
A. had spoken B. speak C. speaks D. to speak
5.What an attractive hair style you have got, Mary!
- _______
A. Thank you very much. I am afraid B You are telling a lie
C. Thank you for your compliment D. I don't like your sayings
6. In Vietnamese schools, English, mathematics, and literature are three _______ subjects,
which are compulsory in many important national examinations.
A. core B. part C. center D. middle
7. He was so ill that he could not _______ his final examination and cancelled it to the next
year.
A. make B. do C. take D. gain
8. I hate _______ personal questions by newly-acquainted friends.
A. to be asking B. being asked C. being asking D. of asking
Read the passage carefully and choose the correct answer.
The body language people use often communicates more about their feelings than the
words they are saying. We use body movements, hand gestures, facial expressions, and
changes in our voice to communicate with each other. Although some body language is
universal, many gestures are culturally specific and may mean different things in different
countries.
If you want to give someone the nod in Bulgaria, you have to nod your head to say no and
shake it to say yes – the exact opposite of what we do! In Belgium, pointing with your index
finger or snapping your fingers at someone is very rude.
In France, you shouldn’t rest your feet on tables or chairs. Speaking to someone with your
hands in your pockets will only make matters worse. In the Middle East, you should never
show the soles of your feet or shoes to others as it will be seen as a grave insult. When
eating, only use your right hand because they use their left hands when going to the
bathroom.
In Bangladesh, the ‘thumbs-up’ is a rude sign. In Myanmar, people greet each other by
clapping, and in India, whistling in public is considered rude.
In Japan, you should not blow your nose in public, but you can burp at the end of a meal to
show that you have enjoyed it. The ‘OK’ sign (thumb and index finger forming a circle)
means ‘everything is good’ in the West, but in China it means nothing or zero. In Japan, it
means money, and in the Middle East, it is a rude gesture.
Question 46: It is mentioned in the passage that many gestures ______. 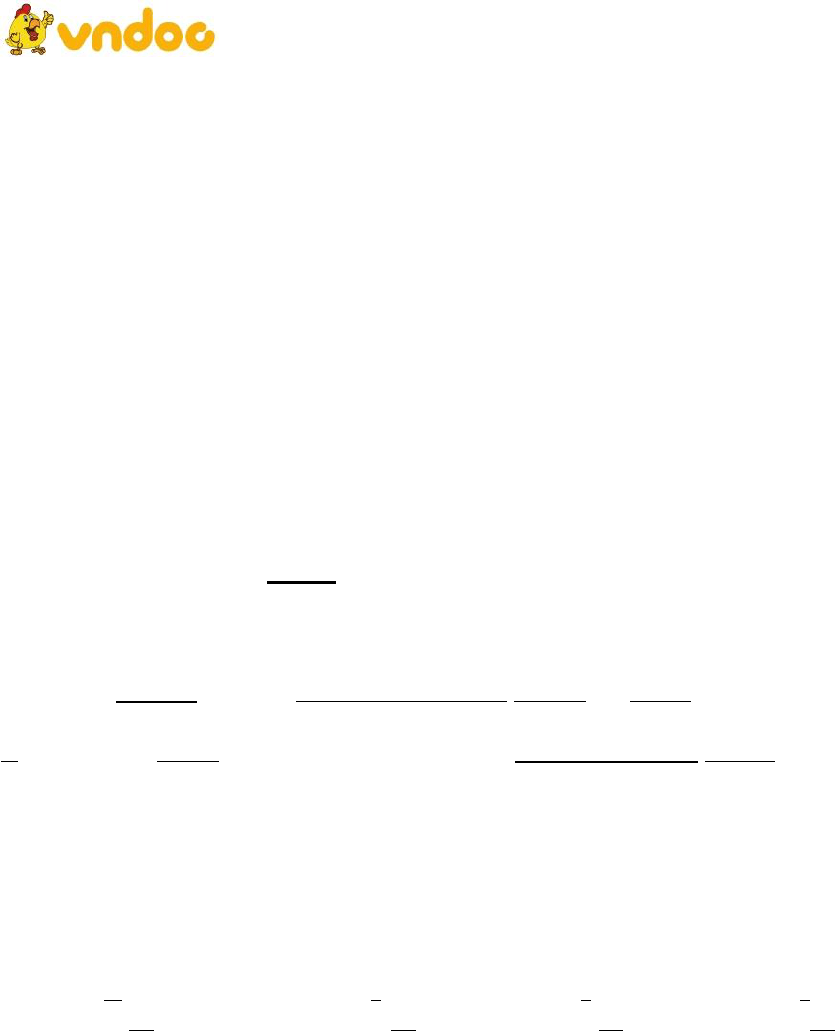 VnDoc - Tải tài liệu, văn bản pháp luật, biểu mẫu miễn phí
A. may mean different things in different countries B. can be used to greet each other in
public
C. are not used to communicate our feelings D. are used in greeting among men
and women
Question 47: People nod their head to say no in ______.
A. Bulgaria B. France C. Belgium D. Japan
Question 48: In the Middle East, people do not use their left hands for eating because they
use their left hands ______.
A. to clean their tables and chairs B. to put in their pockets
C. when going to the bathroom D. when preparing the meal
Question 49: Which of the following is NOT true according to the passage?
A. In France, people shouldn’t rest their feet on tables.
B. In Belgium, snapping your fingers at someone is very rude.
C. In China, the ‘OK’ sign means money.
D. In Myanmar, people greet each other by clapping.
Question 50: The word “others” in paragraph 3 refers to ______.
A. other people B. other soles C. other feet D. other shoes
Choose the one word or phrase (A,B,C or D) that would not be appropriate
14.If I had enough money I would have traveled around the world
A B C D
If we continue to use fuels at the current rate, we would soon have to face a fuel crisis.
A B C D
Use given words to build each meaningful sentence
16.What/ language/ be/ speak/ Japan?.
->What language is spoken in Japan?
17. Ann has/ have/ her composition/ type.
-> Ann has had her composition typed
Choose the word whose underlined part is pronounced differently from that of the rest.
18. A. sees B. sports C. pools D. trains
19. A. laughed B. ploughed C. coughed D. disliked
Finish the second sentence so that it has a similar meaning to the first one.
20. I didn’t see the signal, so I didn’t stop.
->If had seen the signal, I would have stopped
21. He made me do it all over again
->I was made to do it all over again
22. Unless you like this one, I’ll bring you another
->If you do not like this one, I’ll bring you another
23.. But for our parents’ help , we would have never been successful in life
->If our parents had not helped us, we would have never been successful in life
Choose the word whose main stress pattern is not the same as that of the others
1. A. intelligent B. interest C. dependent D. computer
2. A. scholarship B. importance C. foreigner D. outnumber
3. A. atmosphere B. emission C. combining D. pollution
Listening
Task 1 : Listen to the passage. Decide if the statements below are true ( T ) or false ( F ).
Tick the correct answer. 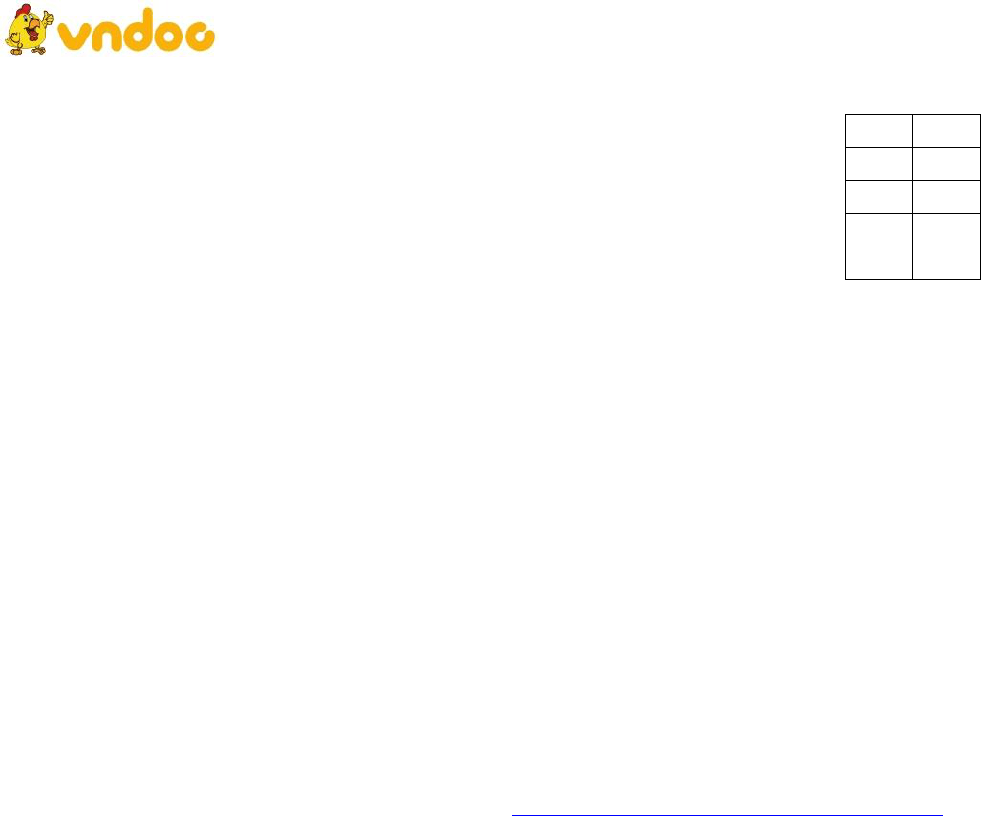 VnDoc - Tải tài liệu, văn bản pháp luật, biểu mẫu miễn phí
T
F
27
The relationship between students and teachers is informal in the USA
28
Students don’t stand up when their teacher enters the room.
29
Most teachers don’t allow students to enter class late or leave early
30
Most American teachers consider that students who are talking to each
other during a test are cheating.
Task 2: Listen to the passage and fill in the missing words.
Last week I went to visit Atlantic College, an excellent .(31)...........................college in
Wales. Unusually, it gives people much needed experience of life outside the classroom, as
well as the opportunity to study for their exams. The students, who are aged between 16 and
18 and come from all over the word, spend the morning studying. In the afternoon they go
out and do a really useful activity, such as helping on the farm, looking after people with
learning..(32)......................., or checking for pollution in rivers.
One of the great things about Atlantic College students is that they come from many
different social backgrounds and countries. As few can afford the fees of
£...(33)....................over two years, grants are available. A quarter of students are British, and
many of those can only attend because they receive government help.
“I really admire the college for trying to (34)........................international understanding
among young people", as Barbara Molenkamp, a student from the Netherlands, said. ''You
learn to live with people and respect them, even the ones you don't like. During the summer
holidays my mother couldn't believe how much less I argued with my sister."
Mời các bạn vào tham khảo các bài tiếp theo tại: https://vndoc.com/tai-lieu-hoc-tap-lop-12