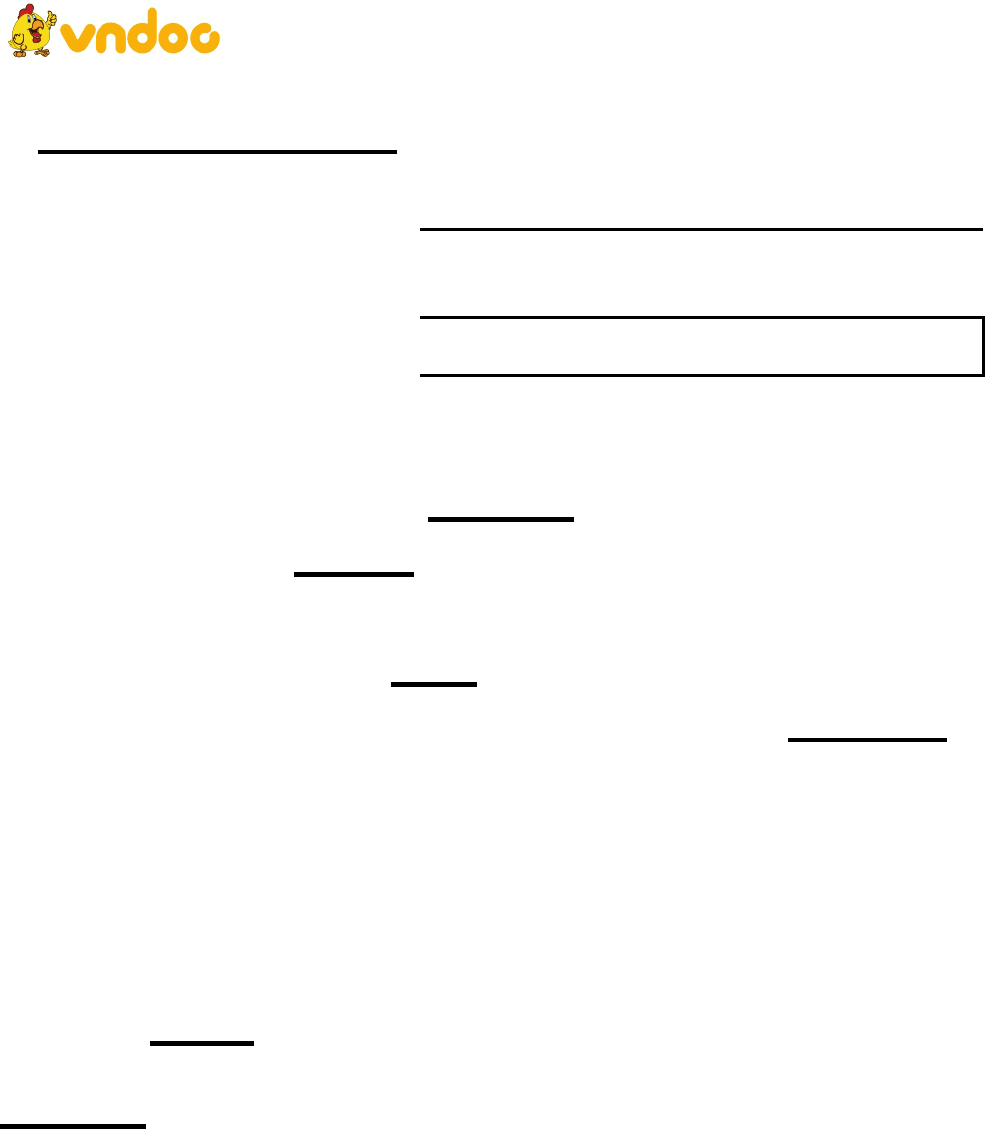 VnDoc - Tải tài liệu, văn bản pháp luật, biểu mẫu miễn phí
E
TĐ
SỞ GIÁO DỤC & ĐÀO TẠO NGHỆ AN
TRƯỜNG THPT ĐẶNG THÚC HỨA
ĐỀ THI THỬ THPT QUỐC GIA NĂM 2018
MÔN: Tiếng Anh
Thời gian làm bài: 60
phút; (50 câu trắc
nghiệm)
Mã đề thi
135
(Thí sinh không được sử dụng tài liệu)
Họ, tên thí sinh:..................................................................... SBD: .............................
Mark the letter A, B, C or D on your answer sheet to indicate the word (s) OPPOSITE in
meaning to the underlined word (s) in each of the following questions
Question 1: This is new washing machine is not a patch on our old one. These clothes are still dirty.
A. to be strange B. to be broken C. to be better D. to be expensive
Question 2: in most countries, compulsory military service does not apply to women.
A. constructive B. optional C. beneficial D. mandatory
Mark the letter A, B, C or D on your answer sheet to indicate the word(s) CLOSEST in
meaningto the underlined word(s) in each of the following questions.
Question 3: Sports and festivals form an integral part of every human society.
A. delighted B. exciting C. Informative D. essential
Question 4: As tourism is more developed, people worry about the damage to the flora and fauna of
the island.
A. fruits and vegetables B. flowersand trees C. plants and animals D. mountains and
forest Read the following passage and mark the letter A, B, C, or D on your answer sheet to
indicate the correct answer to each of the questions
Clara Barton became known as “The Angel of the Battlefield” during the American Civial War.
Born in Oxford, Massachusetts in 1821, Clara Barton’s interest in helping soldiers on the battlefield
began when she was told army stories from her father. Another event that influenced her decision to
help soldiers was an accident her brother had. His injuries were cared for by Barton for 2 years. At
the time, she was only 11 years old. Barton began teaching school at the age of 15. She taught for 18
years before she moved to Washington, D.C. in 1854.
The civil war broke out 6 years later. Immediately, Barton started was service by helping the
soldiers with their needs. At the battle of Bull Run, Clara Barton received permission from the
government to take care of the sick and hurt. Barton did this with great empathy and kindness. She
acknowledged each soldier as a person. Her endurance and courage on the battlefield were admired
by many. When the war ended in 1865, she used 4 years of her life to assist the government in
searching for soldiers who were missing during the war.
The search for missing soldiers and years of hard work made her feeble physically. In 1869, her
doctors recommended a trip to Europe for a rest. Whle she was on vacation, she became involved
with the International Red Cross, an organization set up by the Geneva Convention in 1864. Clara
Barton realized that the red Cross would be a big help to the United States. After she returned to the
United States, she worked very hard to create an American red Cross. She talked to government
leaders and let American people know about the Red Cross. In 1881, the Notional Society of the Red
Cross was finally established with its headquarters in Washington, D.C. Clara Barton managed its
activities for 23 years.
Barton never let her age stop her from helping people. At the age of 79, she helped flood victims in
Galveston, Texas. Barton finally resigned from the Red Cross in 1904. She was 92 years old and had
truly earned her titled “The Angel of the Battlefield”.
Question 5: According to paragraph 1, which of the following is true of the young Clara Barton?
A.
She helped her father when he was a soldier.
B.
She suffered from an accident when she was 11.

VnDoc - Tải tài liệu, văn bản pháp luật, biểu mẫu miễn phí
E
TĐ
C.
She made a decision to live with her brother for 2 years.
D.
She helped her brother who hurt in an accident.
Question 6: The word this in paragraph 2 refers to
A. recognized each soldier as a person B. cooked for soldiers
C. took care of the sick and hurt D. received permission
Question 7: What can be the best title of the reading passage?
A. The American Red Cross B. The angel of the Battlefield
C. The American Civil War D. The International Red Cross
Question 8: The word acknowledged in paragraph 2 could best be replaced by
A. believed B. recognized C. nursed D. pleaded
Question 9: The phrase broke out in paragraph 2 is closest in meaning to
A. extended B. broke down C. closed D. began
Question 10: What can be inferred about the government?
A.
It had respect for Clara Barton.
B.
It showed Clara Barton great empathy and kindness.
C.
It did not have the money to hep Clara Barton.
D.
It did not always agree with Clara Barton.
Question 11: What does the author mention about the American Red Cross?
A.
It was disapproved again and again by the Geneva Convention.
B.
Barton tried to have it set up in America.
C.
The American people were not interested in the Red Cross.
D.
It was first established in the United States.
Question 12: What is the main idea of the passage?
A.
Clara Barton helped wounded soldiers and she was the founder of the Red Cross.
B.
Clara Barton became a nurse during the American Civil War.
C.
Clara Barton worked for disaster victims until she was old.
D.
Clara Barton was a kind and strong woman who helped people in need.
Mark the letter A, B, C, or D on your answer sheet to indicate the sentence that best completes
each of the following exchanges.
Question 13: Andy: "What do you think of football?" ~ Bob: " "
A. Well, it's beyond my expectation. B. It's none of my business.
C. Of course, football players are excellent. D. I am crazy about it.
Question 14: - "Excuse me. Where‟s the parking lot?" - “…………”
A. You are going the wrong way. It‟s not here. B. Do you get lost? I do too.
C. You missed the turn. It‟s back that way D. Why do you ask me? I don‟t know.
Read the following passage and mark the letter A, B, C, or D on your answer sheet to indicate
the correct word or phrase that best fits each of the numbered blanks
A worrying question which (15) global attention is severe overpopulation and its
drastic effects in the countries of the Third World. In regions where the birth rate is extremely high,
poverty and starvation are rife . In India, there is ___(16) of thirty five infants being born every
minute, yet the most shocking figures are those which______(17) the enormous number of the
victims of famine in certain African territories. Communities afflicted with acute destitution are
additionally confronted with illiteracy, life in appalling conditions and infectious diseases
decimating the indigenous populations. There is an urgent need for these problems to be solved .
Unless measures are taken to (18) the suffering of the impoverished underdeveloped
nations, desperate crowds of immigrants will persist in flooding the richer states in search of a
brighter future. It's the most (19) task for the international giants nowadays to help
the poor populations get out of the poverty trap.
Question 15: A. ask B. wishes C. insists D. requires
Question 16: A. an average B. a proportion C. a ratio D. a measure
Question 17: A. appear B. refer C. indicate D. comprise
Question 18: A. evaporate B. ease C. discard D. vanish
Question 19: A. plaguing B. rousing C. challenging D. confronting
Mark the letter A, B, C, or D on your answer sheet to indicate the correct answer to each of the 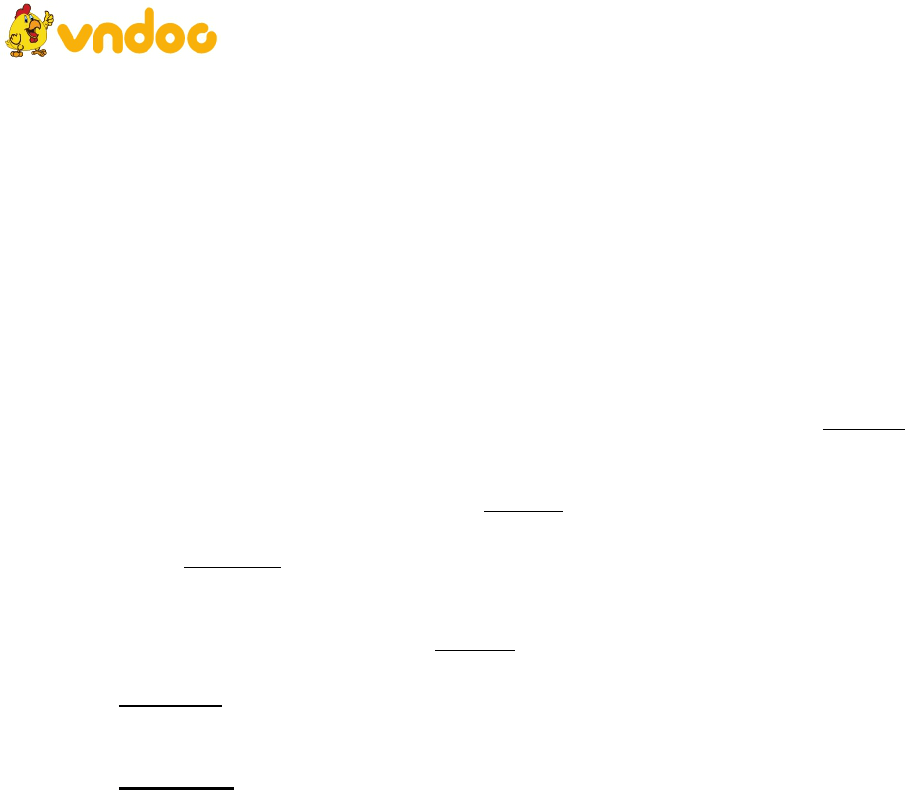 VnDoc - Tải tài liệu, văn bản pháp luật, biểu mẫu miễn phí
E
TĐ
following questions.
Question 20: . I have to buy my parents a new house ................................. price.
A. in place of B. in case of C. regardless of D. not mention
Question 21: Someone bought a Louis Vuitton for a cheap price in the Philippines and later found
out that it was ……………………………..
A. unfaitheful B. untrue C. fake. D. artificial
Question 22: I would like to thank you so much …………..of my family.
A. part B. on behalf C. business D. interest
Question 23: . My neighbour is driving me mad! It seems that………….it is at
night , ……………he plays his music!
A.
the less/ the more loud B. the less/ less
B.
the more late/ the more loudlier D. the later/ the louder
Question 24: Now that he has retired, he lives partly on his pension and partly on the on his
post office savings account.
A. interest B. salary C. wages D. income
Question 25: We are looking for someone who can with the rest of our team.
A. get up B. fit in C. act up D. work off
Question 26: It is a
A. a beautiful old Indian lamp. B. a beautiful Indian old lamp.
C. an Indian beautiful old lamp. D. an old beautiful Indian lamp.
Question 27: It is imperative that his recovery the treatment for at least two months.
A. continue B. to continue C. continued D. continues
Question 28: , he couldn’t finish that test in 60 minutes.
A. As the boy was intelligent B. Intelligent as the boy was
C. As intelligent the boy was D. Intelligent as was the boy
Question 29: it with my own eyes, I would never have believed it.
A. Provided I had seen B. Unless I had not seen
C. If I had seen D. Had I not seen
Question 30: …………….the National High School Graduation Exam with flying colours surprises
me.
A. It is that she passed B. That she passed C. She passed D. That It is she
passed
Question 31: His brother refuses to even listen to anyone else's point of view. Heis very……………………. .
A. narrow-minded B. open-minded C. kind-hearted D. absent-
minded Read the following passage and mark the letter A, B, C,or D on your answer sheet
to indicate the correct answer to each of the questions.
During the 19th century, women in the U. S organized and participated in a large number of reform
movements, including movements to reorganize the prison system, improve education, ban the sale
of alcohol, and most importantly to free slaves. Some women saw similarities in the social status of
women and slaves. Women like Elizabeth Cady Stanton and Lucy Stone were feminists and
abolitionists who supported the rights of both women and blacks. A number of male abolitionists,
including William Lloyd Garrison and Wendell Phillips also supported the rights of women to
speak and participate equally with men in anti- slavery activities. Probably more than any other
movement, abolitionism offered women a previously denied entry into politics. They became
involved primarily in order to better their living conditions and the conditions of others.
When the Civil war ended in 1865, the 14th, and 15th, Amendments to the Constitution adopted in
1868 and 1870 granted citizenship and suffrage to blacks but not to women. Discouraged but
resolved, feminists influenced more and more women to demand the right to vote. In 1869, the
Wyoming Territory had yielded to demands by feminists, but eastern states resisted more
stubbornly than ever before. A woman's suffrage bill had been presented to every Congress since
1878 but it continually failed to pass until 1920, when the 19th Amendment granted women the
right to vote.
Question 32: According to the passage, why did women become active in politics?
A. to improve the conditions of life that existed at the time.
B. to support Elizabeth Cady Stanton