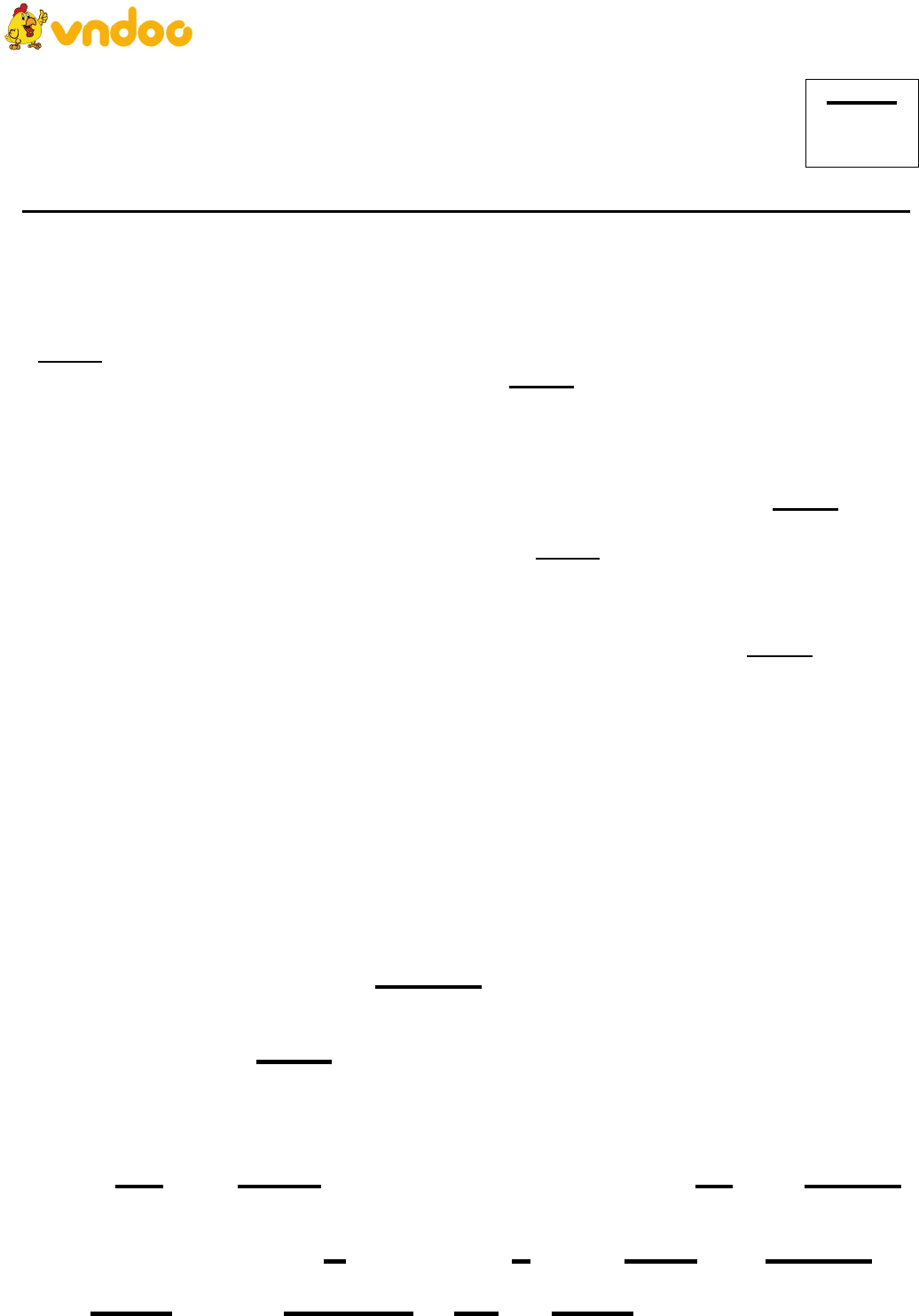 VnDoc - Tải tài liệu, văn bản pháp luật, biểu mẫu miễn phí
E
Đ
E
TRƯỜNG THPT THỦ ĐỨC
Năm học 2017-2018
ĐỀ THI THỬ THPTQG
Môn: ANH – Thời gian: 60 phút
MÃ ĐỀ
CH01
Họ tên học sinh:……………………………….……… Lớp:…………… Số báo danh: ………………
Read the following passage and mark the letter A, B, C, or D on your answer sheet to indicate the
correct word or phrase that best fits each of the numbered blanks from 1 to 5.
Vietnamese information technology leader FPT looks to turn Danang into a "smart city"
(1)
two years, focusing on fields such as agriculture, medicine, energy and traffic.
The company plans to spend $658,000 on pilot (2) in the country's third-largest metropolis
over the next year, aiming to begin smart city operations in 2020. FPT and the city of Danang signed a
memorandum of understanding Thursday.
FPT will work to prevent traffic jams on Danang's streets through real-time monitoring of roads and
management of traffic signals. The company also plans to introduce an electronic patient record system for
hospitals as well as a crop management tool for farmers. Technology would be used in (3) to natural
disasters such as tsunamis and floods as well.
In 2016, the company opened an IT hub in Danang, (4) it employs 10,000 engineers. Danang
offers cheaper labor costs than Hanoi or Ho Chi Minh City, and its abundance of science and engineering
schools helps FPT secure talent. The city's potential as a tech hub continues to grow as companies from
Japan, Europe and the U.S. start to gather.
Plans to create smart cities are underway in other parts of Vietnam. Hanoi, (5) , is slated to
become a smart city by 2023 with help from a public-private partnership between Japan's trade ministry
and companies such as Sumitomo Corp. and Mitsubishi Heavy Industries. Ho Chi Minh City has teamed
with the real estate arm of Singaporean conglomerate Keppel to develop smart technologies.
(https://www.theguardian.com/uk)
Câu 1:
A.
during B. for
C.
in
D.
at
Câu 2:
A.
conceptions B. projects
C.
feats
D.
syllabus
Câu 3:
A.
retaliating B. replying
C.
responding
D.
hitting back
Câu 4:
A.
why B. which
C.
where
D.
who
Câu 5:
A.
however B. now that
C.
thus
D.
for instance
Mark the letter A, B, C, or D on your answer sheet to indicate the word(s) CLOSEST in meaning to the
underlined word(s) in each of the following questions.
Câu 6: Perhaps we do now need a strong, charismatic and inspiring leader to help it make sense of all
the uncertainty and seize the opportunity to make a statement of identity.
A.
monotonous B. appalling C. appealing D. distasteful
Câu 7: The economic crisis initiated renovation policies of the late 1980s.
A. made way for B. gave rise to C. did harm to D. set fire to
Mark the letter A, B, C, or D on your answer sheet to show the underlined part that needs correction
in each of the following questions.
Câu 8: Big loans on very favourite conditions are offered by the bank to those who make a large-scale
A B C D
investment.
Câu 9: Alice is working really hard on her business skills as she wants to make a good manageress.
A B C D
Câu 10: However unfavorable is our position, we must put a bold face on it.
A B C D
Mark the letter A, B, C, or D on your answer sheet to indicate the word whose underlined part differs 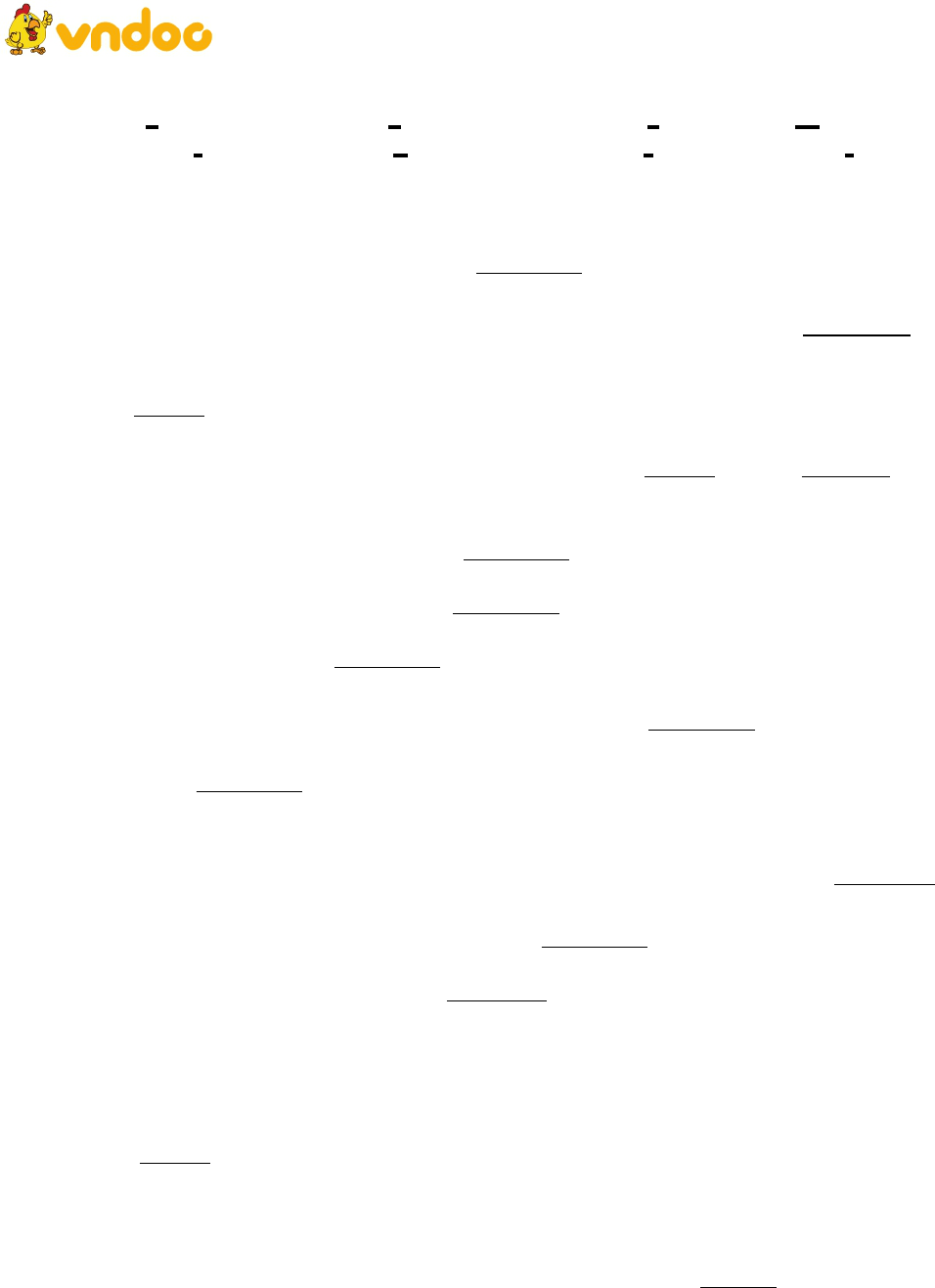 VnDoc - Tải tài liệu, văn bản pháp luật, biểu mẫu miễn phí
E
Đ
E
from the other three in pronunciation in each of the following questions.
Câu 11: A. burial B. include C. improve D. couture
Câu 12: A. mouths B. baths C. paths D. months
Mark the letter A, B, C, or D on your answer sheet to indicate the correct answer to each of the
following questions.
Câu 13: The combination of visual and auditory is intriguing as well for the audience.
A. encouragements B. motivations C. stimuli D. inspirations
Câu 14: If we had been being more considerate in using our natural resources, we so worried
now about the fact that our next generation will be lacking in energy.
A. wouldn’t be B. wouldn’t have been C. won’t be D. weren’t
Câu 15: Up when it saw its master.
A. jumped the dog B. did the dog jump C. the dog jumped D. does the dog jump
Câu 16: He likes seeing and talking to her, but he can't stand (see) her (talk) with other
men.
A. see – talk B. seeing – talking C. seeing – talks D. to see – to talk
Câu 17: He ordered us back to work before we our meal. Then I fed a dog with the leftovers.
A. ate B. were eating C. had eaten D. would eat
Câu 18: William borrowed Grandpa's old suit neatly on a hanger to wear to the interview.
A. draped B. draping C. which draped D. being draping
Câu 19: The teacher’s comments to me that my son is in serious trouble at school.
A. illustrate B. indicate C. mean D. show
Câu 20: It may be that boys find it difficult being with a girl who's ahead.
A. proceeding B. promoting C. accelerating D. forging
Câu 21: I am your teacher, who definitely expect great things and nothing but success of my
students.
A. narrow-minded B. highly-respected C. strong-willed D. quick-witted
Câu 22: Some candidates failed the oral examination because they didn’t have enough .
A. confidence B. confide C. confidential D. confident
Câu 23: How can I know who stained the carpet! Mary that, who knows.
A. may have done B. must have done C. might do D. could do
Câu 24: I wish to see the personnel manager, ?
A. will I B. do I C. may I D. can I
Mark the letter A, B, C, or D on your answer sheet to indicate the most suitable sentence to
complete each of the following exchanges.
Câu 25: Pat: "Being polite is hard work."
Kathy: " . Behaving well is never easy. But to get along, we must learn some basic dos and
don'ts."
A. You too B. What’s next? C. You’ve gained my heart D. I’m with you
there
Câu 26: Maria: "Do you feel like seeing the film?" Diana: "Sure. "
A. The soundtrack was amazing. B. Whom does it star?
C. What film is it? D. It is my hobby.
Mark the letter A, B, C, or D on your answer sheet to indicate the sentence that is closest in meaning to
each of the following questions.
Câu 27: The kids’ having left home leaves us a lot of spare room.
A.
The kids left home to make room for us.
B.
We’ve got a room because the kids have left home.