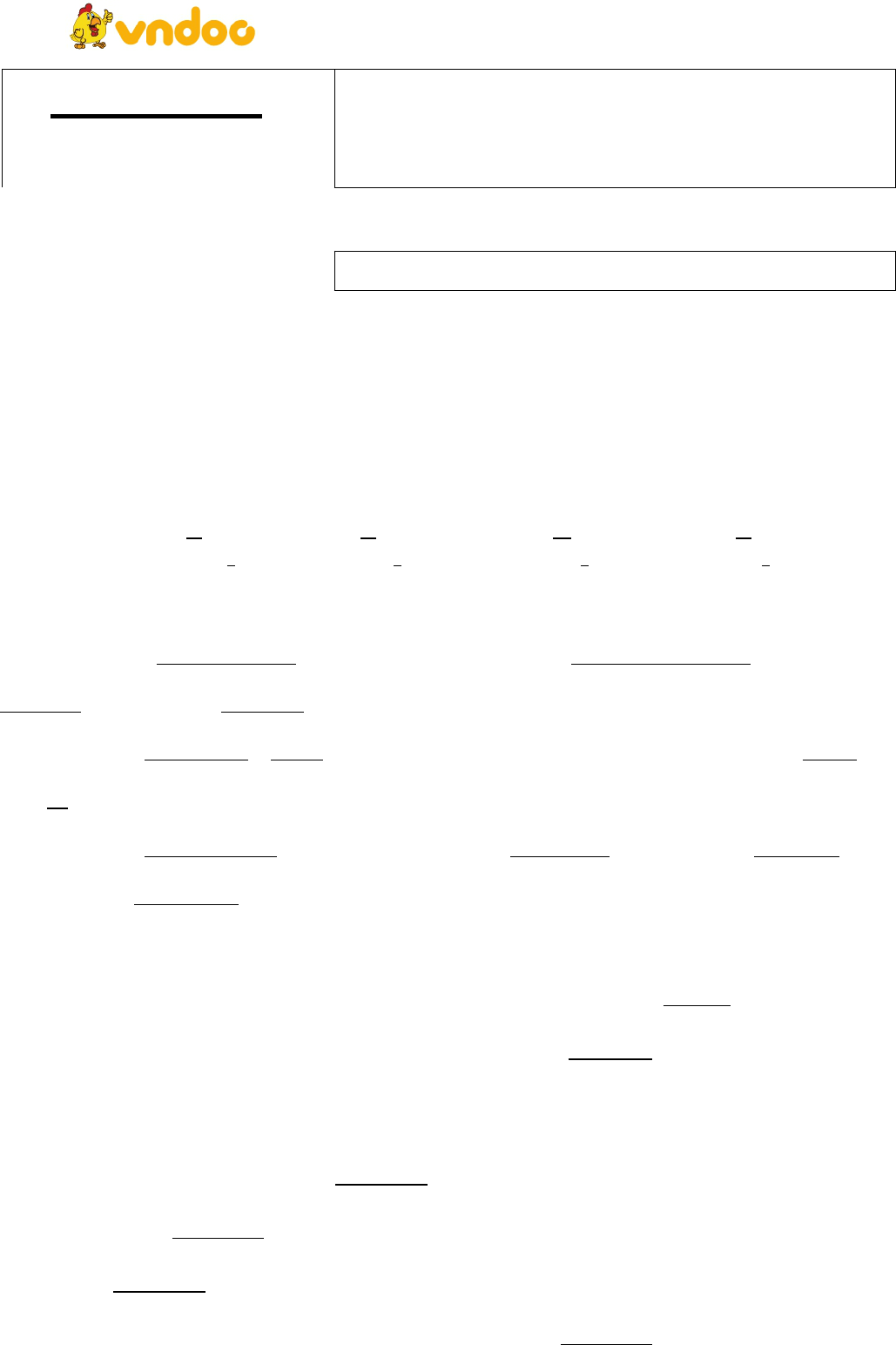 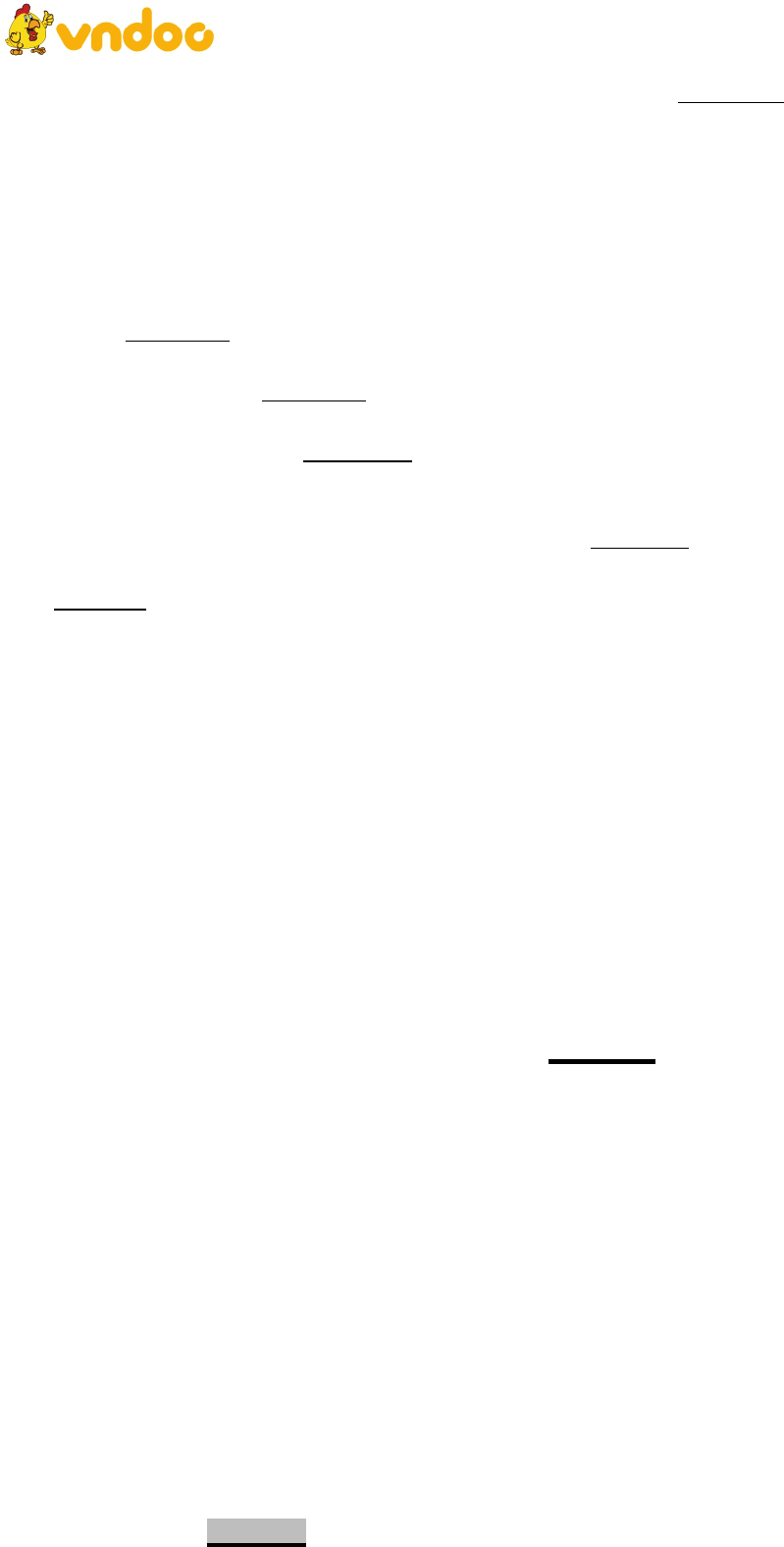 VnDoc - Tải tài liệu, văn bản pháp luật, biểu mẫu miễn phí
T
Đ
Question 14: The police paid no attention to Claire’s complaints because she them so
many times before.
A. has phoned B. had phoned C. was phoning D. phoned
Question 15: I think you are your time looking for a job in this town. There’s not much to do
here.
A. missing B. losing C. wasting D. spending
Question 16: Was there anything in you wanted to talk about?
A. particular B. especially C. detailed D. special
Question 17: After a hesitation, she began to speak with such a convincing voice.
A. small B. rude C. slight D. impolite
Question 18: The tin-opener seems for the left-handed people.
A. designing B. to have designed C. to be designed D. to design
Question 19: Be sure not to rely too on your mother tongue when you are learning a
foreign language.
A. numerously B. severely C. abundantly D. heavily
Question 20: Linda has to make a speech in front of a large audience , ?
A. doesn’t she B. hasn’t she C. won’t she D. isn’t she
Question 21: the end of the book, they get married and live happily ever after.
A. On B. At C. Till D. In
Read the following passage and mark the letter A, B, C or D on your answer sheet to indicate the
correct answer to each of the questions.
No student of a foreign language needs to be told that grammar is complex. By changing word
sequences and by adding a range of auxiliary verbs and suffixes, we are able to communicate tiny
variations in meaning. We can turn a statement into a question, state whether an action has taken place
or is soon to take place, and perform many other word tricks to convey subtle differences in meaning.
Nor is this complexity inherent to the English language. All languages, even those of so-called
'primitive' tribes have clever grammatical components. The Cherokee pronoun system, for example, can
distinguish between 'you and I', 'several other people and I' and 'you, another person and I'. Grammar is
universal and plays a part in every language, no matter how spread it is. So the question which has
baffled many linguists is - who created grammar?
Some of the most recent languages evolved due to the Atlantic slave trade. At that time, slaves from a
number of different ethnicities were forced to work together under colonizer's rule. Since they had no
opportunity to learn each other's languages, they developed a make-shift language called a pidgin.
Pidgins are strings of words copied from the language of the landowner. They have little in the way of
grammar, and in many cases it is difficult for a listener to deduce when an event happened, and who
did what to whom. Speakers need to use circumlocution in order to make their meaning understood.
Interestingly, however, all it takes for a pidgin to become a complex language is for a group of children
to be exposed to it at the time when they learn their mother tongue. Slave children did not simply copy
the strings of words uttered by their elders, they adapted their words to create a new, expressive
language. It included standardised word orders and grammatical markers that existed in neither the
pidgin language, nor the language of the colonizers. Complex grammar systems which emerge from
pidgins are termed creoles, and they are invented by children.
Further evidence of this can be seen in studying sign languages for the deaf. Sign languages are not
simply a series of gestures; they utilise the same grammatical machinery that is found in spoken
languages. Moreover, there are many different languages used worldwide. The creation of one such
language was documented quite recently in Nicaragua. Previously, all deaf people were isolated from
each other, but in 1979 a new government introduced schools for the deaf. Although children were
taught speech and lip reading in the classroom, in the playgrounds they began to invent their own sign
system, using the gestures that they used at home. It was basically a pidgin. Each child used the signs
differently, and there was no consistent grammar. However, children who joined the school later, when
this inventive sign system was already around, developed a quite different sign language. Although it

VnDoc - Tải tài liệu, văn bản pháp luật, biểu mẫu miễn phí
T
Đ
was based on the signs of the older children, the younger children's language was more fluid and
compact, and it utilized a large range of grammatical devices to clarify meaning. What is more, all the
children used the signs in the same way. A new creole was born.
Question 22: In paragraph 1, why does the writer include information about the Cherokee language?
A. To demonstrate how difficult it is to learn the Cherokee language
B. To show how English grammar differs from Cherokee grammar
C. To show how simple, traditional cultures can have complicated grammar structures
D. To prove that complex grammar structures were invented by the Cherokees.
Question 23: What can be inferred about the slaves' pidgin language?
A. It was created by the land-owners.
B. It was difficult to understand, even among slaves.
C. It contained complex grammar.
D. It was based on many different languages.
Question 24: All the following sentences about Nicaraguan sign language are true EXCEPT:
A. The language incorporates signs which children used at home.
B. The language was perfected by younger children.
C. The language has been created since 1979.
D. The language is based on speech and lip reading.
Question 25: 'make-shift' in paragraph 2 is closest in meaning to
A. simple and temporary B. private and personal
C. extensive and diverse D. complicated and expressive
Question 26: Which sentence is closest in meaning to the italics sentence?
Grammar is universal and plays a part in every language, no matter how widespread it is.
A. Some languages include a lot of grammar, whereas other languages contain a little.
B. All languages, whether they are spoken by a few people or a lot of people, contain grammar.
C. Languages which contain a lot of grammar are more common that languages that contain a little.
D. The grammar of all languages is the same, no matter where the languages evolved.
Question 27: All of the following are features of the new Nicaraguan sign language EXCEPT:
A. New gestures were created for everyday objects and activities.
B. All children used the same gestures to show meaning.
C. The hand movements were smoother and smaller.
D. The meaning was clearer than the previous sign language.
Question 28: Which idea is presented in the final paragraph?
A. Linguists have proven that English was created by children.
B. English was probably once a creole.
C. The English past tense system is inaccurate.
D. Children say English past tenses differently from adults.
Question 29: The word 'consistent' in paragraph 3 could be replaced by
A. imaginable B. uniform C. natural D. predictable
Mark the letter A, B, C, or D on your answer sheet to indicate the word(s) CLOSEST in meaning to the
underlined word(s) in each of the following questions.
Question 30: During the interview, you should show your best side, your keenness to work.
A. sense of responsibility B. satisfying C. special interest D. sense of humor
Question 31: They finally saw eye to eye on the business deal.
A. agreed B. insisted C. disagreed D. looked
Mark the letter A, B, C, or D on your answer sheet to indicate the word(s) OPPOSITE in meaning
to the underlined word(s) in each of the following questions.
Question 32: Mary doesn't like conventional dressing. She prefers something modern and shocking.