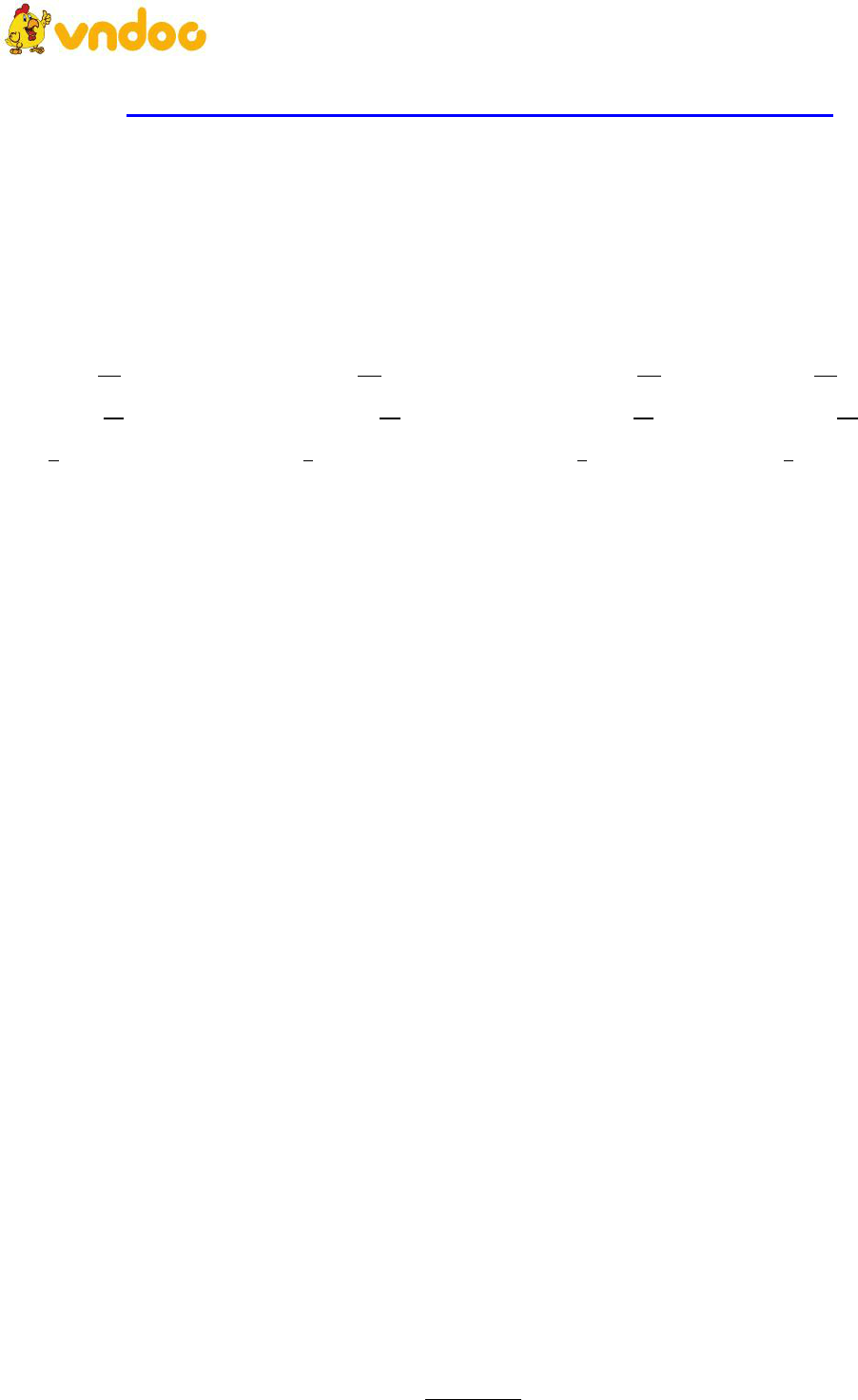 VnDoc - Tải tài liệu, văn bản pháp luật, biểu mẫu miễn phí
A. perfect B. helpful C. polite D. efficient
14.I am the last one ________ of the news.
A. informing B. to inform C. to be informed D. inform
15.It was the boy ______ broke the window.
A. which B. who C. whom D. whose
16.Nobody helps me to send this document to my office, _____?
A. does he B. do they C. don’t they D. doesn’t she
17. I am rude to her, __________?
A. am I B. am not I C. aren’t I D. are I
III. Read the passage carefully, then choose the correct answer. [1P]
In an early survey conducted in 1888, a billion and a half people inhabited the earth. Now, the
population is about six billion and is growing fast. Even though the rate of growth has begun to
slow down, most people believe the population size may be eight billion during the next several
years.
If we examine the amount of land available for this ever increasing population, we begin to see
the problem. Not all land is useful to us because it cannot produce food. We can cut out about
one fifth of it because it is covered by snow and ice. Then we can cut out another fifth because it
is desert. Another fifth is mountains. The other fifth does not have enough soil for crops to grow
because it is bare rock. Obviously, with so little land to support us, we should take great care
not to reduce it any more or with the rapidly growing population we may sooner or later lack
food to eat and place to live in.
18.What is the main topic of the passage?
A. The world's population and the shortage of cultivated land.
B. The growth of the world's population.
C. The necessity of reducing the rate of birth.
D. The shortage of cultivated land.
19.The world's population ______ at present.
A. has stopped growing B. is still growing
C. is decreasing rapidly D. stands at about eight billion
20.According to the passage, we ______.
A. can cultivate on all land. B. are not influenced by the land reduction
C. can grow crops on bare rock D. should protect land 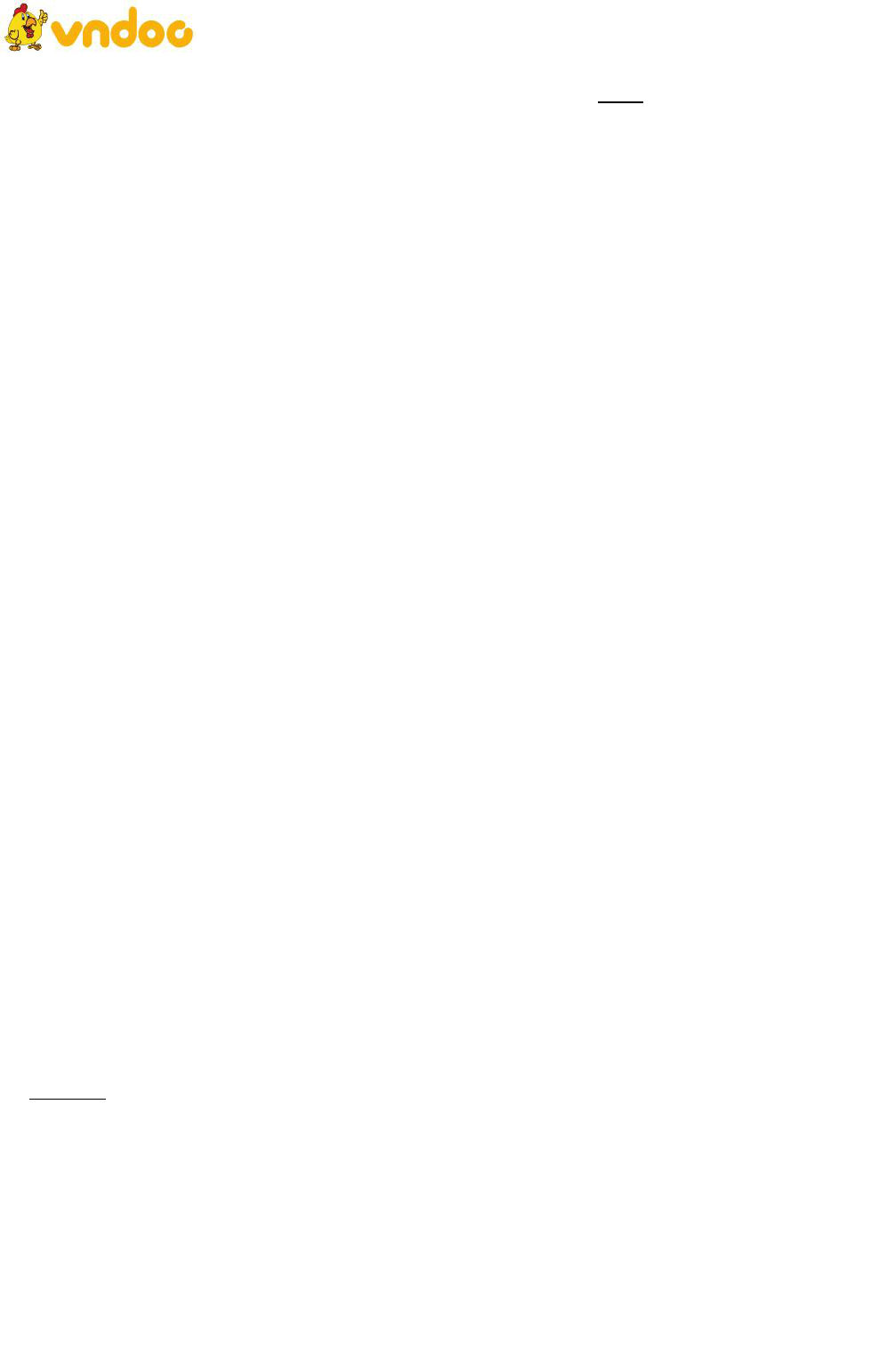 VnDoc - Tải tài liệu, văn bản pháp luật, biểu mẫu miễn phí
21.Which of the following is closest in meaning to the word 'bare' in the second paragraph?
A. hard B. empty C. treeless D. rough
22.Which of the following sentences is not true according to the passage?
A. Most of the world's land are uncultivated.
B. The rapid growth of population may lead to a shortage of land.
C. Only one fifth of the world's land is being cultivated.
D. There has been a dramatic reduction of the birth rate.
IV. Read the passage and fill in each gap with a correct word. [1p]
Plants supply man with food, clothing, and shelter - his most important needs. Many of our
most useful medicines are also made from (23)...... . In addition, plants (24)........beauty and
pleasure to our lives. Most people enjoy the smell of flowers, the sight of a waving grain field,
and the quiet of a forest. (25)........, not all plants are useful to man. Weeds that grow in fields
and gardens choke off useful plants. Tiny bits of pollen from certain plants cause
(26)......diseases as asthma and hay fever. Other plants destroy millions of .dollars worth of
crops yearly.
23. A. plants B. platation C. planting D. planted
24. A. cause B. send C. add D. bring
25. A. Although B. Therefore C. However D. Moreover
26. A. the B. any C. same D. such
V. Supply the correct word form. [1.5p]
27. The fish look so…………….. swimming about in the tank BEAUTY
28. Books provide the reader with a lot of…………………… INFORM
29. ………………………, if the wind does not blow, there is no wind energy FORTUNE
VI. Finish each sentence in such a way that it means exactly the same as the one printed
before it. [1.5p]
30.The dog grabbed at the piece of meat and ran away.
A. It was the dog that grabbed at the piece of meat and ran away
B. It was at the piece of meat that the dog grabbed and ran away
C. The piece of meat was grabbed by the dog and ran away.
31. It is said that many people are homeless after the floods.
A. Many people are said to have been homeless after the floods.
B. Many people are said to being homeless after the floods.