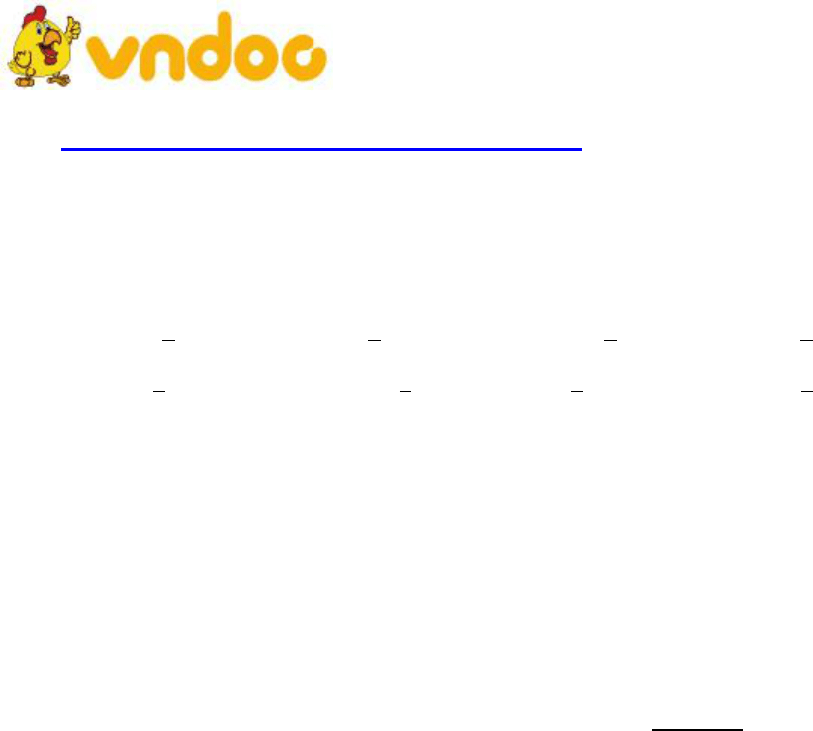 VnDoc - Tải tài liệu, văn bản pháp luật, biểu mẫu miễn phí
ĐỀ THI CUỐI HỌC KÌ 2 LỚP 10 NĂM HỌC 2018 - 2019
MÔN TIẾNG ANH
I. Choose the word whose underlined part is pronounced differently.
Câu 1: A. protect B. pollute C. deforest D. contaminate
Câu 2: A. damage B. contaminate C. area D. natural
II. Choose the word whose stress is placed in different position from that of the rest.
Câu 3: A. fertilizer B. environment C. ecosystem D. agriculture
Câu 4: A. depletion B. disposal C. assignment D. volunteer
III. Choose the best answer to complete the following sentences.
Câu 5: He would work in aviation if he .................... 6 years younger
A. will be B. would be C. is D. Were
Câu 6: The area is roped off because the water is seriously polluted. The SYNONYM of
“polluted”?
A. disappeared B. contaminated C. purified D. endangered
Câu 7: These children live in the city, so they know little about rural life. If they ............ in
the countryside, they would know about the life of farmers.
A. Lived B. would live C. will live D. live
Câu 8: She warned me ………… late-night horror films.
A. not to watch B. don’t watch C. shouldn’t watch D. not watching
Câu 9: People have used coal and oil to ____ electricity for a long time.
A. generate B. generated C. generates D. generation
Câu 10: Oil, coal and natural gas are ____ fuels made from decayed material.
A. unleaded B. smokeless C. solid D. fossil
Câu 11: They asked me how many children ………… in the school.
A. there is B. are there C. were there D. there were

VnDoc - Tải tài liệu, văn bản pháp luật, biểu mẫu miễn phí
Câu 12: Many species of fauna and flora in this national park is being in danger. The
underlined word has closest meaning to:
A. coral B. sauna C. animals D. Coastal
Câu 13: Many national parks have been established to protect ____animals.
A. endangered B. dangerous C. endanger D. danger
Câu 14: Non-renewable energy sources are running _________________
A. out B. on C. to D. up
Câu 15: Today, many governments have taken into consideration the ................... of water
resources.
A. Conservative B. conserve C. preservation D. conservatism
Câu 16: We ……………..you to do the house work if we have time
A. helped B. will help C. to help D. helping
Câu 17: If she ..................... on well with her colleagues, they will support her a lot with her
work.
A. got B. will get C. gets D. Get
Câu 18: All fossil fuels are ____ resources that cannot be replaced after use.
A. non-renewable B. unlimited C. renewable D. available
Câu 19: Increased consumption will lead to faster ____ of our natural resources.
A. depletion B. exhausting C. deplete D. exhaustive
Câu 20: Coal and oil are non-renewable ____ sources.
A. energetic B. engineer C. engineering D. energy
Câu 21: I will be surprised if you ……………the exam. You’re working so hard.
A. failed B. fail C. Failing D. fails
Câu 22: Solar energy, air and water are _____ resources because there is unlimited supply.
A. available B. non-renewable C. limited D. renewable
IV. Read the passage and choose the best answers

VnDoc - Tải tài liệu, văn bản pháp luật, biểu mẫu miễn phí
In Southeast Asian, many forests have been cut down to produce timber and to clear land for
farms and industries. The destruction of forests has reduced the living space of wildlife.
Much of Asian’s wildlife is also threatened by over-hunting. Many people kill animals for
food or hunt them to sell to zoo, medical research, and pet trader. Because of habitat
destruction and over-hunting, many large Asian animals, including elephants, rhinoceroses,
and tigers, have become endangered.
In China, people have cut down most of the forests for wood, which has caused serious
soil erosion. The soil is deposited in rivers and streams, which lowers the quality of the
water. The Huang He, or Yellow River, is so named because the light-colored soil gives the
water a yellowish color. The soil has also raised the riverbed. As a result, the Huang He
often floods, causing great property damage and loss of life along its banks.
Câu 23: Rhinoceroses and elephants are mentioned as an example of _______.
A. endangered animals in Asia. B. animals traders want to have
C. animals attracted to medical research D. large animals kept in zoos.
Câu 24: The living space of wildlife in Southeast Asia_______
A. is a threat to farmers
B. has been reduced when forests are cut down.
C. is rebuilt when people destroy forests
D. is near farms and industries.
Câu 25: The word over-hunting has the closest meaning to________
A. hunting for wildlife B. hunting overseas
C. hunting in the highlands D. hunting too much
Câu 26: The Huang He often floods because __________.
A. water from many streams flows into it
B. of the low quality of the quality
C. the river is shallow due to the raised riverbed
D. wood is deposited in rivers
Câu 27: The Huang He________.