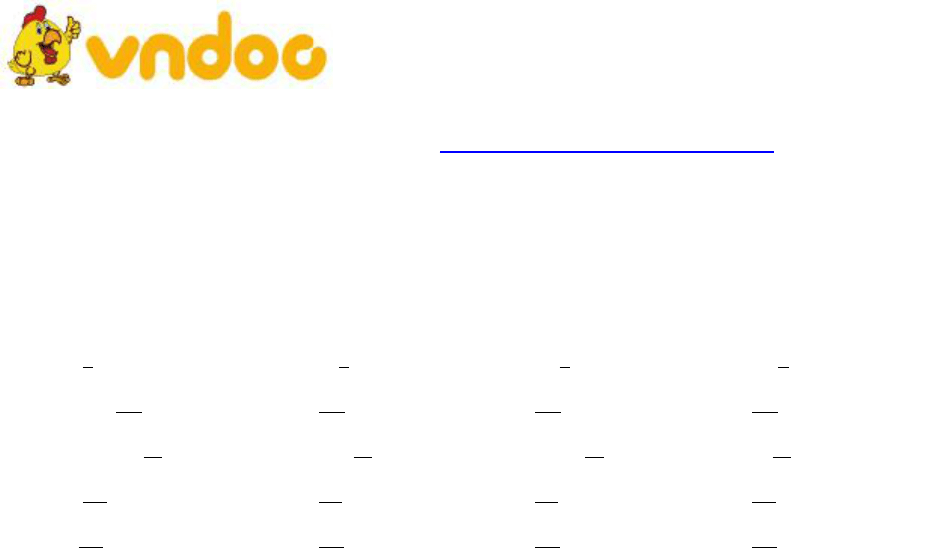 VnDoc - Tải tài liệu, văn bản pháp luật, biểu mẫu miễn phí
ĐỀ LUYỆN THI HSG MÔN TIẾNG ANH LỚP 11
NĂM HỌC 2018 - 2019
I. Choose the word whose underlined part is pronounced differently from that of the
others.
1. A. designed B. reserved C. deserve D. leisure
2. A. procedure B. duration C. durian D. duplicator
3. A. commercial B. special C. artificial D. recipient
4. A. excursion B. surgeon C. surfing D. surveyor
5. A. architecture B. characters C. chaos D. charitable
II. Choose the word that is stressed differently from the others in the list.
1. A. windsurfing B. temperature C. synchronize D. procedure
2. A. horizon B. defensive C. contestant D. industry
3. A. spectator B. outstanding C. typical to D. intensive
4. A. delegation B. energetic C. participant D. competition
5. A. tsunami B. conference C. president D. agency
III. Choose the option that best completes the blank.
1. They soon ____ me although I had left 20 minutes before they did.
A. caught up with B. get out with C. heard from D. came across
2. The water company will have to cut off water supplies while repairs to the pipes are
____.
A. turned out B. carried out C. filled out D. put on
3. The accident had a(n) ____ effect on her.
A. extensive B. profound C . wide D. total
4. It was his ____ belief that he could win.
A. utter B. single C. firm D. hard
5. I would like to thank everybody for their ____ support.
A. undiming B. complete C. unfailing D. deep
6. Where's my bag? I ____ remember leaving it here.
A. surely B. fully C. distinctly D. totally
7. The facilities at many schools today are still ____ inadequate.
A. sadly B. woefully C. regrettably D. grimly

VnDoc - Tải tài liệu, văn bản pháp luật, biểu mẫu miễn phí
8. After leaving school, he tried to ____ a living as a door-to-door salesman.
A. gain B. win C. obtain D. earn
9. She would make an excellent lawyer - she is conscientious and has a well ____ mind.
A. trained B. intentioned C. built D. informed
10. Dr Evans has _____ a valuable contribution to the life of the school.
A. done B. made C. caused D. created
11. We've got some time to ____ before the meeting begins, so let's go for a stroll in the
park.
A. kill B. destroy C . pass D. spend
12. I've been ____ advised not to say anything.
A. strongly B. greatly C. seriously D. significantly
13. I forgot to ____ earlier that I'll be home late this evening.
A. announce B. mention C. relate D. narrate
14. We were just having a friendly ____ about football.
A. chat B. whisper C. gossip D. report
15. My boss didn't say it in so many words, but she ____ that I would get a promotion.
A. asserted B. clarified C. declared D. implied
16. It is difficult for me to ____ exactly what I mean in a foreign language.
A. express B. speak C. pronounce D. address
17. Jack ____ the map for several minutes, unable to believe his eyes.
A. glanced B. stared C. gazed D. watched
18. She ____ her daughter's boyfriend up and down, and then asked him in.
A. watched B. observed C. noticed D. eyed
19. Would you like to ____ the house that is for sale this afternoon?
A. observe B. view C. regard D. overlook
20. I ____ at my watch. It was already well after three.
A. glanced B. faced C. viewed D. checked
IV. Read the passage and choose the best answer for each of the question below.
Passage 1
It has become an American tradition that those who attain great wealth return some of it
to the public through philanthropy. An early example of this was the generosity of Amos
Lawrence of Massachusetts, a wealthy merchant, who in the 1830's and afterwards

VnDoc - Tải tài liệu, văn bản pháp luật, biểu mẫu miễn phí
contributed much money for famine relief in Ireland. He also donated generously to
educational and other humanitarian causes.
In the early years of the twentieth century several men who had amassed vast fortunes
likewise became great philanthropists. Andrew Carnegie, an exceptionally energetic man,
who had begun working twelve hours a day when he was only fourteen years old, became
one of the world's richest men by pioneering in the steel industry. After his retirement in
1990 he devoted his time and his wealth to the establishment of free public libraries. He
also set up foundations for medical research and for world peace. Carnegie's belief, as he
expressed it in an essay, was that the wealthy person must 'consider all surplus revenues
which come to him simply as trust funds' which he 'is strictly bound as a matter of duty to
administer in the manner...best calculated to produce the most beneficial results for the
community - the man of wealth thus becoming the mere trustee and agent for his poorer
brethren.
John D. Rockefeller, who also began as a poor boy, became fabulously rich through oil
refineries and other enterprises. In his old age, in the early 1900's, he began to donate
millions for beneficial undertakings. The various Rockefeller foundations support
research as well as humanitarian causes in the United States and in other parts of the
world. Rockefeller funds are now fighting hunger through the so-called 'green
revolution,' whereby new agricultural techniques have greatly multiplied the yield of
food-crops in Mexico, India, Pakistan, and part of Africa.
1. How to become a philanthropist?
A. You must be very rich and know how to keep it.
B. You are very rich and donate your money to humanitarian causes.
C. You are a very rich and well-known merchant.
D. You are a very rich and well-known person in the steel industry.
2. Who contributed much money for famine relief in Ireland?
A. Amos Lawrence B. Massachusetts C. Andrew Carnegie D. Rockefeller
3. Who is very successful in the steel industry?
A. Amos Lawrence B. Massachusetts C. Andrew Carnegie D. Rockefeller
4. The word “enterprises” in the last paragraph means: ____
A. projects B. companies C. organizations D. industries
5. The word “revenues” in the second paragraph means: ____