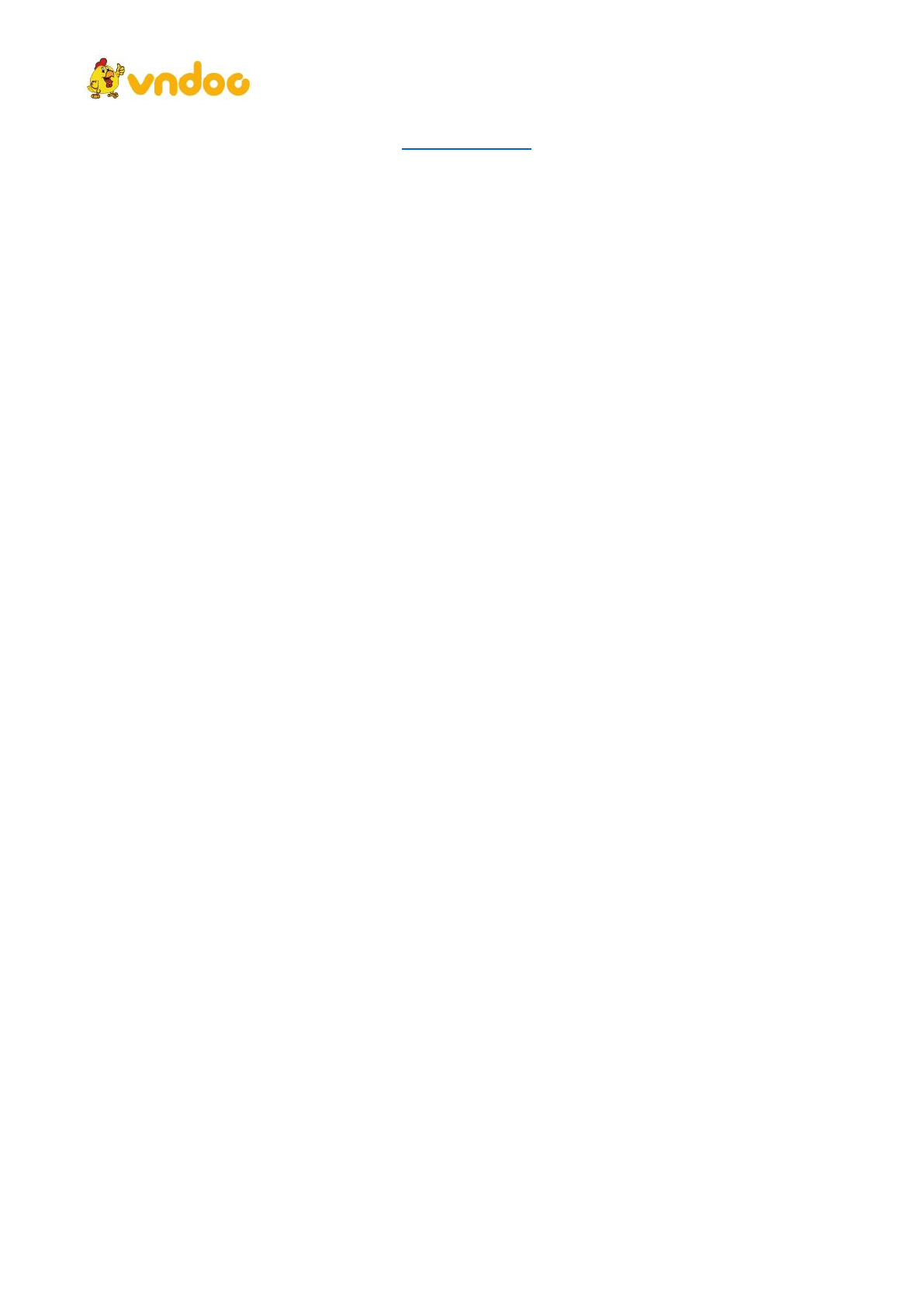 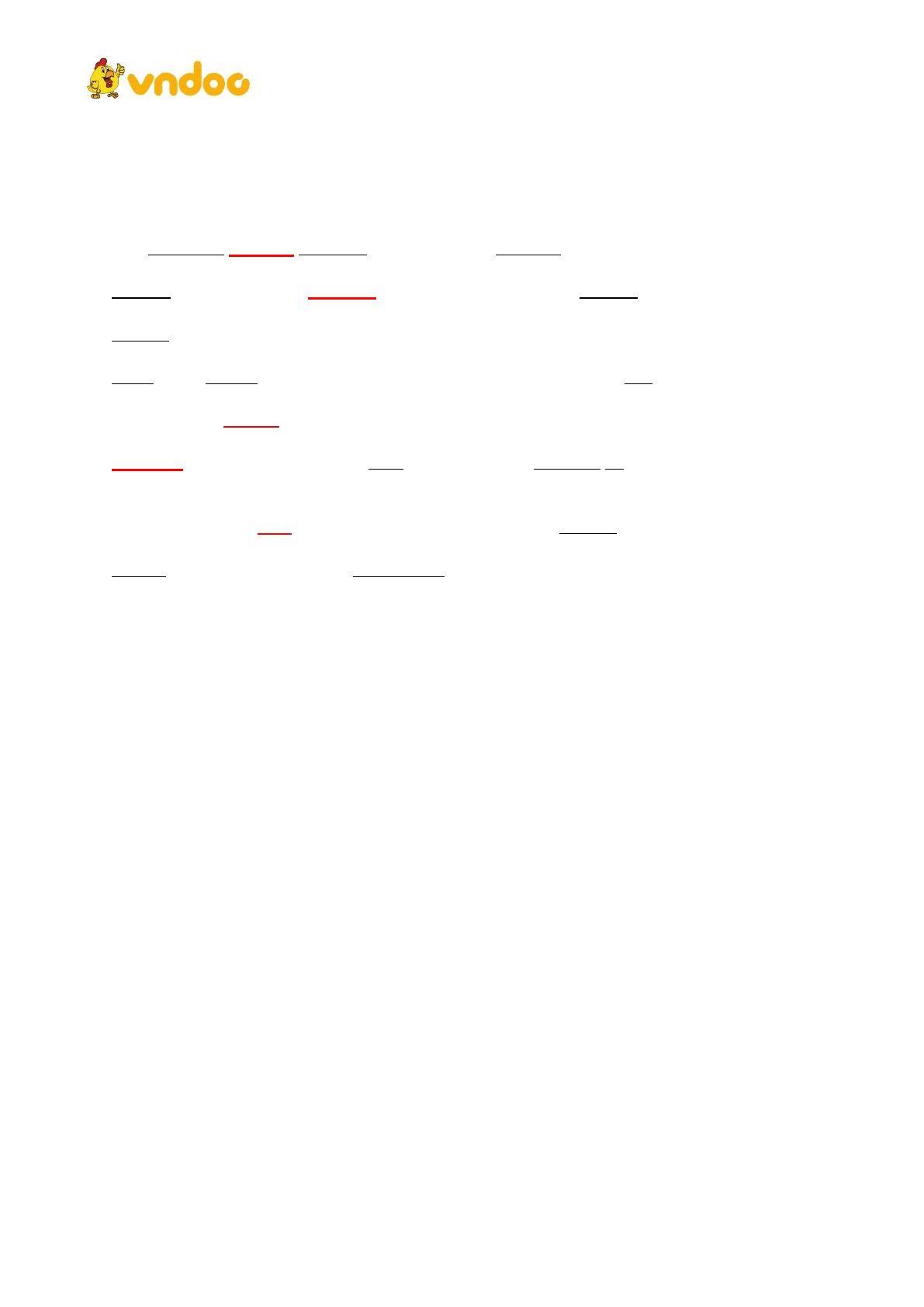 VnDoc - Tải tài liệu, văn bản pháp luật, biểu mẫu miễn phí
25. No sooner ______ the corner than the wheel came off.
a. the van turned b. did the van turned
c. the van had turned d. had the van turned
C. Identify the one underlined word or phrase- A, B, C or D- that must be changed for the
sentence to be correct.
26. You had better learning a foreign language before applying for a job.
A B (learn) C D
27. Passing a driver's test is a necessity requirement for all people wishing
A B (necessary) C
to drive a motor vehicle.
D
28. When I kept getting unwanted calls, I called the phone company and had my
A B C
phone number change.
D (changed)
29. Breaking her leg the last time she went, Brenda decided not to go on the
A (having broken/After breaking) B C D
school skiing trip this year.
30. Louis got his sister read his assignment, and then asked her to write the report
A (to read) B
for him because he did not have enough time.
C D
III. READING
A. Choose the correct word or phrase- a, b, c or d - that best completes the passage.
In the United States, volunteering is (31) ______ as a good way to give children a sense of
(32) ______ reponsibility and to bring the family together. Volunteerism is (33) ______ across the
United States today because people are trying to put more emphasis on family (34) ______, and they
are looking for ways to help young people have a feeling of hope and satisfaction. It is (35) ______
that volunteering helps children discover their talents, develop their skills, and learn about (36)
______ and problem solving. (37) ______ , family volunteering has some (38) ______ it benefits the
community that is (39) ______, it benefits the family for serving together, and it benefits each (40)
______ in the family.
31. a. respected b. viewed c. inspected d, showed
32. a. commune b. communal c. communion d. community
33. a. growing b. traveling c. extending d. forming
34. a. background b. relationships c. togetherness d. connections
35. a. regarded b. believed c. concerned d. accepted
36. a. operation b. corporation c. correspondence d. cooperation
37. a. Moreover b. However c. Therefore d. Consequently
38. a. advantages b. disadvantages c. conveniences d. inconveniences
39. a. cared b. taken c. served d. offered
40. a. character b. community c. personnel d. individual
B. Read the text carefully, then choose the correct answers.
A YEAR WITH OVERSEAS VOLUNTEERS
I was with Overseas Volunteers (OV) for a year after leaving university, and I was sent to an
isolated village in Chad, about 500 km from the capital N'Djamena. Coming from' a rich country, I
got quite a shock as conditions were much harder than I had expected. But after a few days I soon got
used to living there. The people were always very friendly and helpful, and soon I began to
appreciate how beautiful the countryside was.
One of my jobs was to supply the village with water. The well was a long walk away. And
the women used to spend a long time every day carrying heavy pots backwards and forwards. So I
contacted organization and arranged to have some pipes delivered. We built a simple pipeline and a 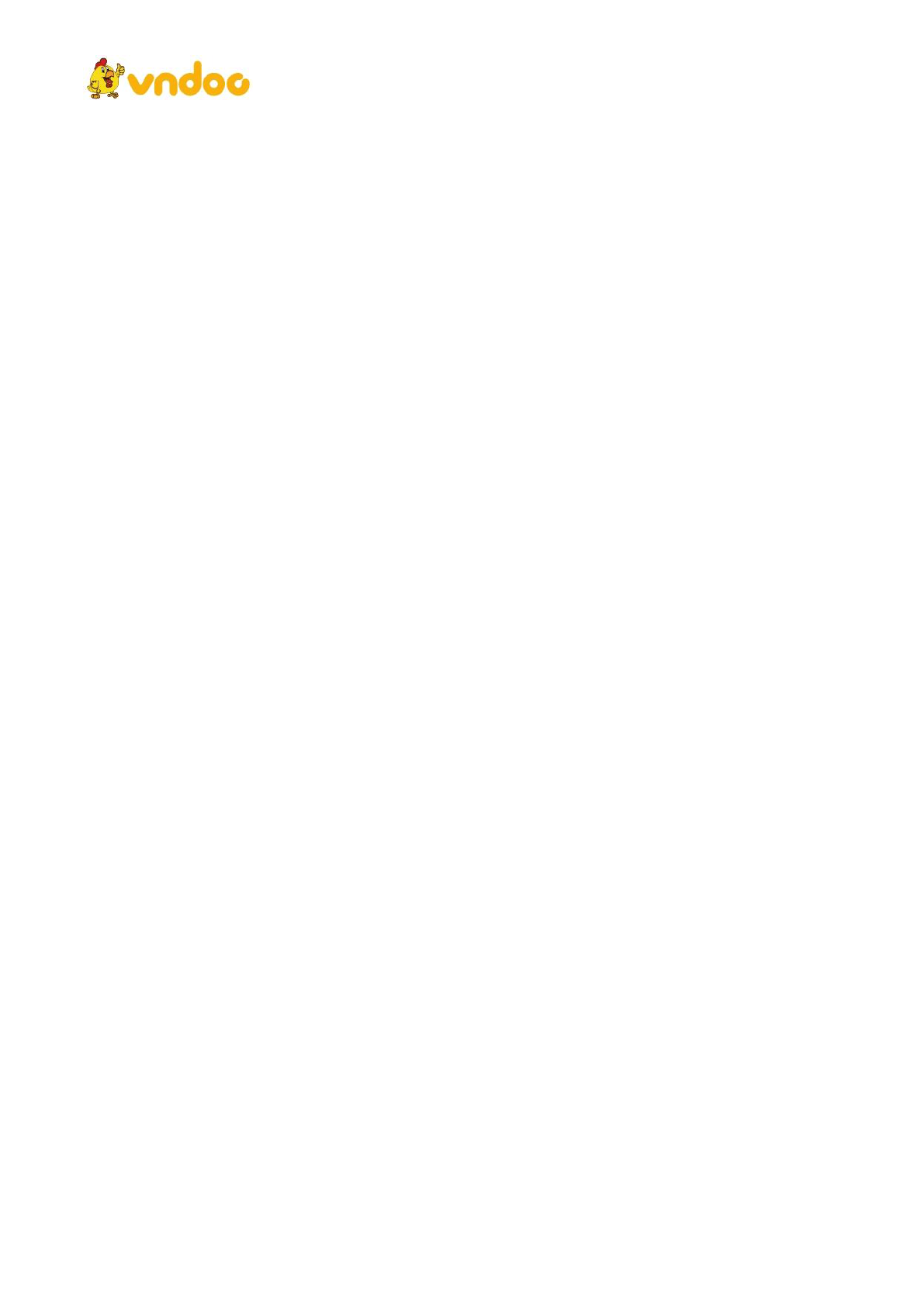 VnDoc - Tải tài liệu, văn bản pháp luật, biểu mẫu miễn phí
pump, and it worked first time. It wasn't perfect - there were a few leaks, but it made a great
difference to the villagers, who had never had running water before. And not only did we have
running water, but in the evenings it was hot, because the pipe had been lying in the sun all day. All
in all, I think .my time with OV was a good experience. Although it was not well-paid, it was well
worth doing, and I would recommend it to anyone who was considering working for a charity.
41. The author ______.
a. has been working for OV for a year
b. is living in the capital N'Djamena
c. was born in a rich family
d. used to be a volunteer working in a remote village
42. How did the author feel when he arrived in the village?
a. surprised b. impressed c. disappointed d. depressed
43. Which of the following is not true?
a. It took a lot of time to take water home from the well.
b. The villagers used to live in conditions without running water.
c. A pipeline was built to carry clean water to homes.
d. Solar energy was used to heat water.
44. The word 'It' in line 13 refers to ______.
a. running water b. the pump c. the pineline d. the supply of water
45. What does the author think about his time with OV?
a. It was paid a lot of money. b. It was not worth working.
c. It wasted time. d. It provided good experience.
IV. WRITING
A. Choose the answer - a, b, c, or d -that is nearest in meaning to the printed before it.
46. There was very little response to the charity appeal.
a. Nobody responded to the charity appeal.
b. Very little money was raised by the charity appeal.
c. Everybody seemed to appeal to the charity.
d. They raised a lot of money from the charity 'appeal.
47. With the help of new computer programs, we can solve many problems quickly and accurately.
a. New computer programs have enabled us to solve many problems quickly and
accurately.
b. New computer programs are quick and accurate.
c. We can solve problems quickly and accurately without computer programs.
d. New computer programs are not able to solve many problems quickly and accurately.
48. People swimming here do so at their own risk.
a. People may swim here without fear or risk.
b. Swimming is so risky here that it is forbidden.
c. People should realize that it is dangerous to swim here.
d. Swimmers will not be blamed if anything happens to them here.
49. After fighting the fire for 12 hours, the firemen succeeded in putting it out.
a. The fireman managed in vain to put the fire out after a 12-hour fight.
b. Having fought the fire for 12 hours, the firemen were able to put it out.
c. The firemen wasted 12 hours putting the fire out.
d. Fighting the fire for 12 hours, the fire was put out.
50. People donated a lot, so the victims of the tsunami are now able to overcome difficulties.
a. But for people's generous donation, the victims of the tsunami wouldn't be able to
overcome difficulties now.
b. Despite people's generous donation, the victims of the tsunami are facing lots of difficulties
now.
c. To overcome difficulties, the victims of the tsunami needed people's generous donation.