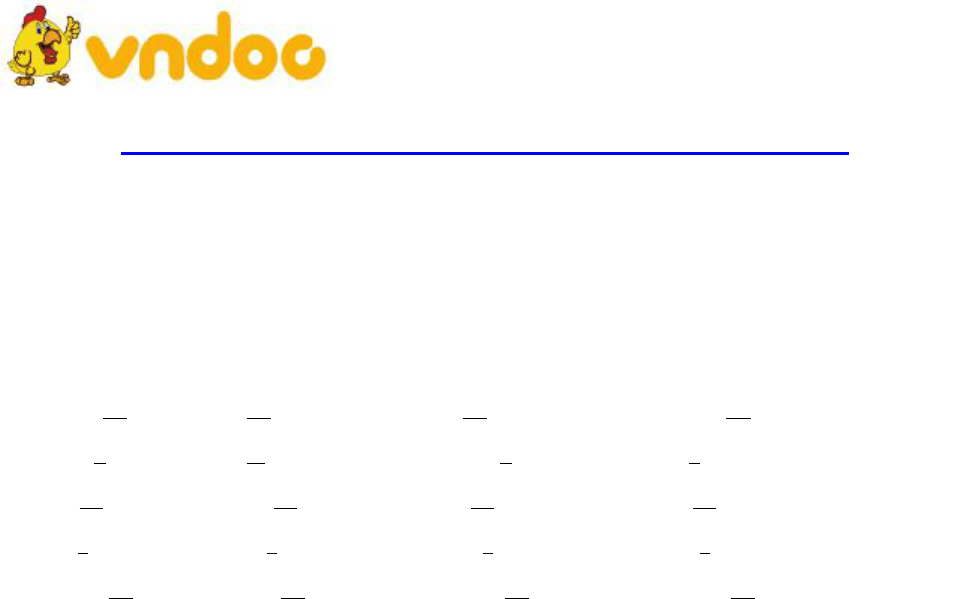 VnDoc - Tải tài liệu, văn bản pháp luật, biểu mẫu miễn phí
ĐỀ LUYỆN THI HSG LỚP 9 NĂM 2019 - 2020
MÔN TIẾNG ANH CÓ ĐÁP ÁN
I. Phonology
A. Choose the word whose underlined part is pronounced differently from the others
1. A. parachute B. champagne C. chivalry D. churchgoer
2. A. inflexible B. elegant C. experiment D. recollection
3. A. breakfast B. already C. feasible D. heather
4. A. resign B. resound C. resonant D. resource
5. A. cleared B.hatred C. sacred D. wicked
B. Choose the word whose stress pattern is different from that of the others in each group.
6. A. development B. competitive C. immediate D. sympathetic
7. A. vocational B. employer C. minority D. reasonable
8. A. analysis B. destination C. presidential D. apprehension
9. A. exploration B. facilities C. scientific D. educational
10. A. temperature B. acquaintance C. photography D. distinctive
II. Reading comprehension
Read the passages and choose the best answer
As Christmas evolved in the United States, new customs were adopted and many old
ones were reworked. The legend of Santa Claus, for example, had origins in Europe and was
brought by Dutch settlers to New York in the early 18
th
century. Traditionally, Santa Claus –
from the Dutch Sinter Klaas – was depicted as a tall, dignified, religious figure riding a
white horse through the air. Known as Saint Nicholas in Germany, he was usually
accompanied by Black Peter, an elf who punished disobedient children. In North America he
eventually developed into a fat, jolly old gentleman who had neither the religious attributes
of Saint Nicholas nor the strict disciplinarian character of Black Peter.

VnDoc - Tải tài liệu, văn bản pháp luật, biểu mẫu miễn phí
Santa’s transformation began in 1823, when a New York newspaper published the
poem A Visit from Saint Nicholas, which Clement Clark Moore had written to amuse his
daughter. The poem introduced many Americans to the story of a kindly saint who flew over
housetops in a reindeer-drawn sleigh. Portraits and drawings of Santa Claus by American
illustrator Thomas Nast further strengthened the legend during the second half of the 19
th
century. Living at the North Pole and assisted by elves, the modern Santa produced and
delivered toys to all good children. By the late 19
th
century he had become such a prominent
figure of American folklore that in 1897, when Virginia O’Hanlon wrote to the New York
Sun newspaper asking if Santa was real, she received a direct answer: “Yes, Virginia, there
is a Santa Claus”.
1. Who brought the legend of Santa Claus to the USA according to the passage?
A. Sinter Klaas B. Saint Nicholas C. A German D. Dutch settlers
2. Santa Claus was traditionally described as a
A. tall man who could walk through the air B. fat, jolly, old man
C. religious figure D. fat man riding a white horse
3. Santa Claus in North America was depicted as
A. a man with the strict disciplinarian character of Black Peter
B. a good old man with less religious character
C. one with religious attributes of Saint Nicholas
D. a jolly man on horseback
4. Who was Black Peter?
A. an elf accompanying Saint Nicholas B. an elf who rode a white horse
C. one of the disobedient children D. a popular traditional figure
5. What word is closest in meaning to attributes?
A. symbols of a person B. natural qualities C. effects D. outer appearance
6. Where did the legend of Santa Claus come from?
A. the North Pole B. Europe C. North America D. the City of New York
7. 1823 was mentioned as a year when

VnDoc - Tải tài liệu, văn bản pháp luật, biểu mẫu miễn phí
A. Clement Clark Moore wrote his first poem
B. Clement Clark Moore’s poem made him popular
C. Saint Nicholas visited New York
D. the image of Santa Claus was transformed
8. According to Clement Clark Moore’s poem
A. Santa Claus had nothing different in appearance from the traditional one
B. Santa Claus had wings and could fly
C. Santa Claus liked poetry
D. Santa Claus was a kindly saint who flew over housetops in a sleigh
9. The answer Yes, Virginia, there is a Santa Claus is an illustration for the fact that
A. the New York Sun was popular with children
B. Santa Claus was a prominent figure at that time
C. newspapers are unreliable
D. Virginia O’Hanlon was a reader of the New York Sun
10. Which of the following statements is TRUE?
A. Santa Claus was an imaginary old man created by artists based on traditional
figures
B. Living in the North Pole, Santa Claus visited children at Christmas
C. Santa Claus was a real figure living in northern America
D. Santa Claus was a story based on Saint Nicholas and Black Peter
III. Choose the best word that fits each gap of the passage.
National Health Service (NHS) (1) ________ ambulances are available and free for
cases of sudden (2) ________ or collapse, for accidents and for doctors’ urgent call. Special
(3) _________ services, such as free dental treatment and (4) _______ and immunization of
children against certain (5) ________ diseases, are provided under the NHS to safeguard the
health of (6) _______ women and young children. Free family planning advice and (7)
________ is available from general practices (GPs) and family planning clinics. Nation-wide
screening programmes for breast canner and cervical cancer are available to the most (8)