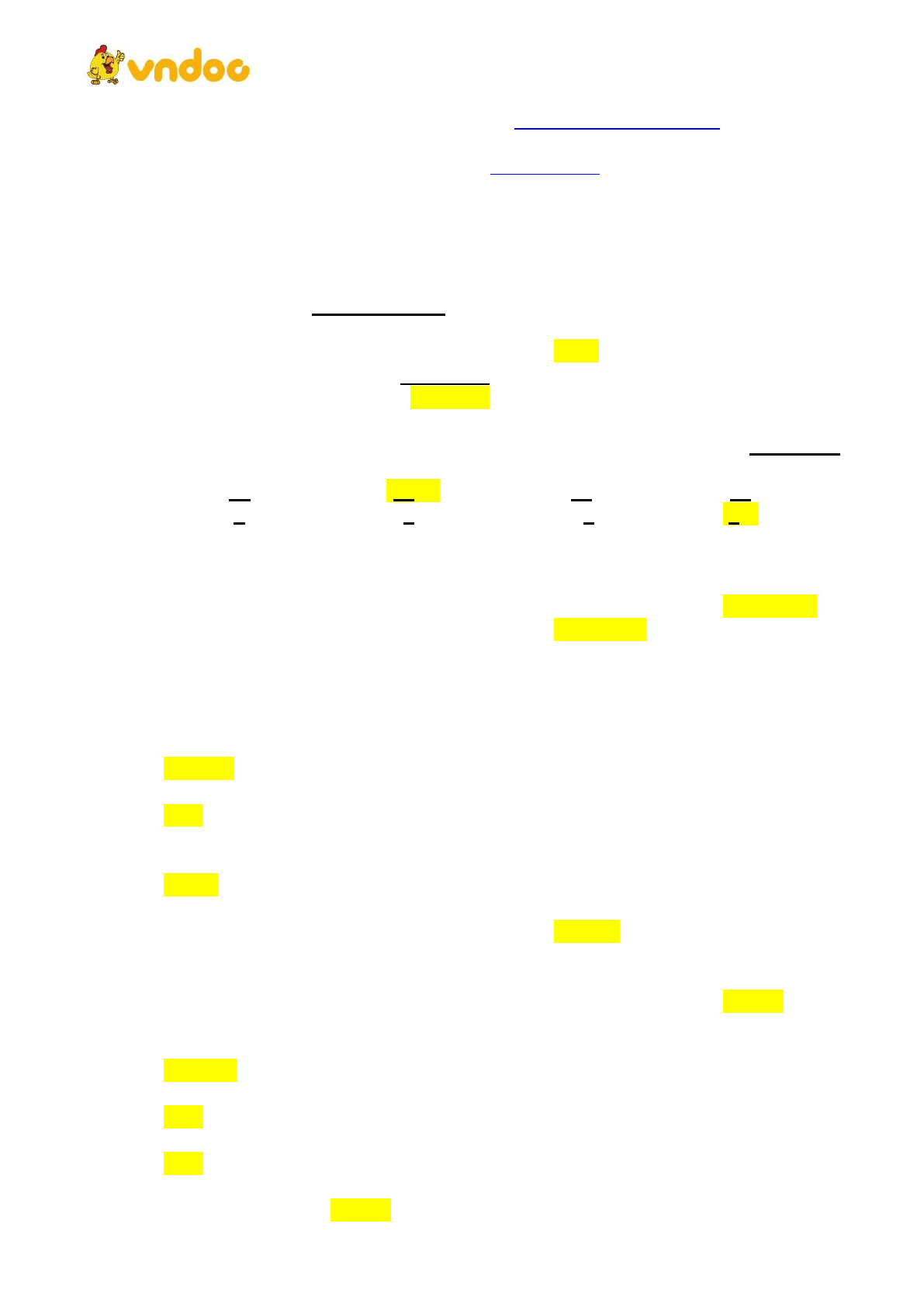 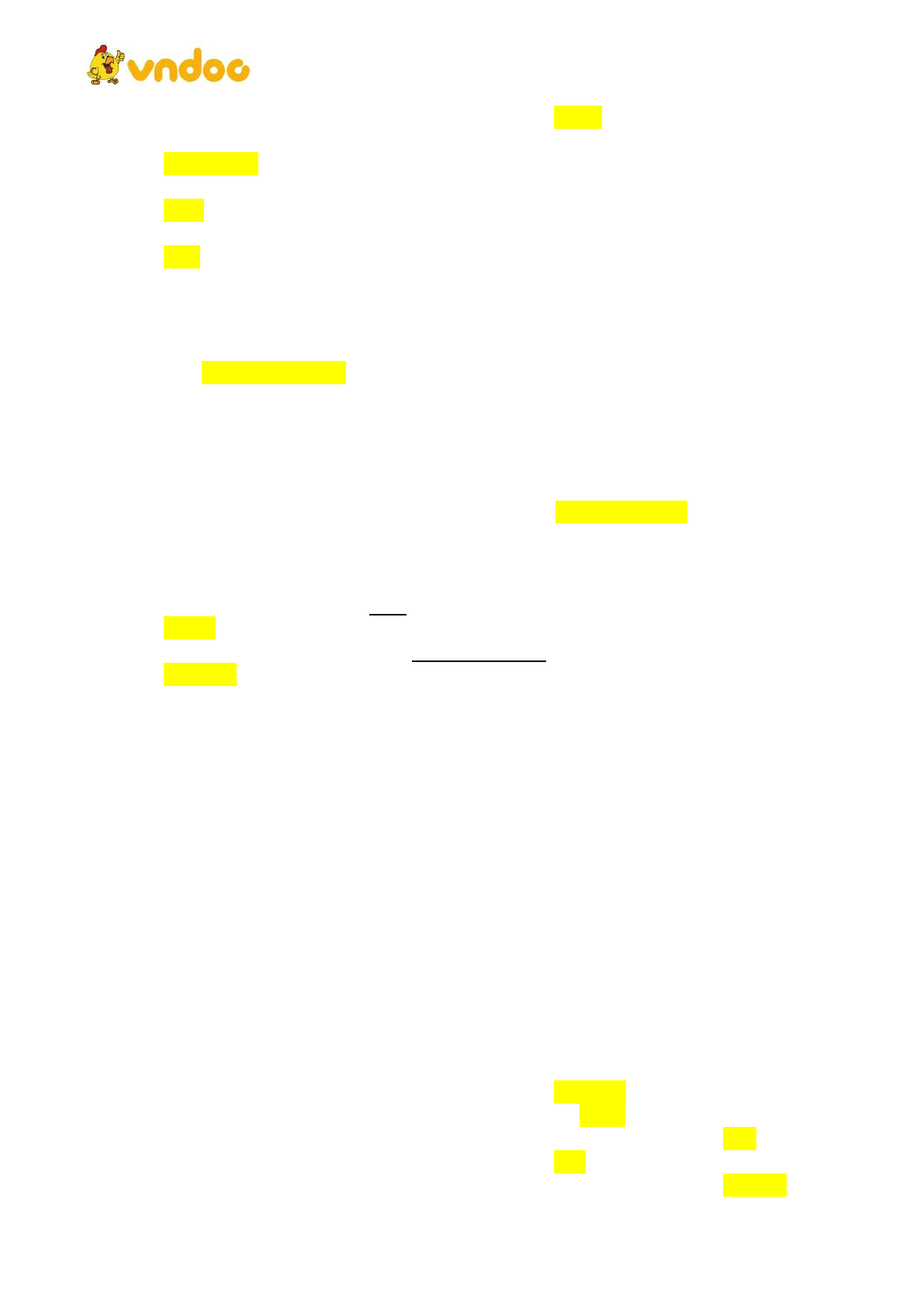 VnDoc - Tải tài liệu, văn bản pháp luật, biểu mẫu miễn phí
A. diploma B. account C. report D. papers
Question 17: Before you begin the exam paper, always read the________ carefully.
A. instructions B. answers C. orders D. rules
Question 18: I like________ books better than________ films.
A. Ø/ Ø B. the/ the C. Ø/ the D. the/ Ø
Question 19: Don’t be________. Say thank you.
A. rude B. tactless C. nasty D. crude
Mark the letter A, B, C, or D on your answer sheet to indicate the sentence that best
completes each of the following exchanges.
Question 20: ~ Clemen: “_____________” ~ Dick: “Is there something on your mind?”
A. I’ve been feeling a bit anxious lately. B. I feel like going out for a while.
C. I’ve been out strolling all day. D. Why don’t you think more
rationally?
Question 21: ~ Maria: “Don’t get a black cat - they bring bad luck!” ~ Black:
“_____________”
A. No, it can jump over this fence. B. Don’t be serious. It’s just for fun.
C. Yes, I bought it at the bazaar. D. That’s a load of rubbish!
Mark the letter A, B, C, or D on your answer sheet to indicate the word(s) OPPOSITE in
meaning to the underlined word(s) in each of the following questions.
Question 22: She can't accept even mild criticism of her work.
A. severe B. high C. deep D. soft
Question 23: Public opinion is currently running against the banking industry.
A. stand up for B. kick out C. poke fun at D. look up to
Read the following passage and mark the letter A, B, C, or D on your answer sheet to
indicate the correct word or phrase that best fits each of the numbered blanks from 24 to
28.
AFTERNOON TEA
In far too many places in England today, the agreeable habit of taking afternoon tea
has vanished. 'Such a shocking waste of time,' says one. 'Quite unnecessary, if one has had
lunch or (24)________ to eat in the evening,' says another.
All very true, (25)________ but what a lot of innocent pleasure these strong-minded
people are missing! The very ritual of tea-making, warming the pot, making sure that the
water is just boiling, inhaling the fragrant steam, arranging the tea-cosy to fit snugly around
the container, all the preliminaries (26)________ up to the exquisite pleasure of sipping the
brew from thin porcelain, and helping oneself to hot buttered scones and strawberry jam, a
slice of feather-light sponge cake or home-made shortbread.
Taking tea is a highly civilized pastime, and fortunately is still in favour in Thrush
Green, where the inhabitants have got it down to a (27)________ art. It is common
(28)________ in that pleasant village to invite friends to tea rather than lunch or dinner.
Question 24: A. views B. designs C. proposes D. minds
Question 25: A. no wonder B. no way C. no doubt D. no matter
Question 26: A. run B. come C. draw D. lead
Question 27: A. sheer B. rare C. fine D. pure
Question 28: A. custom B. procedure C. habit D. practice 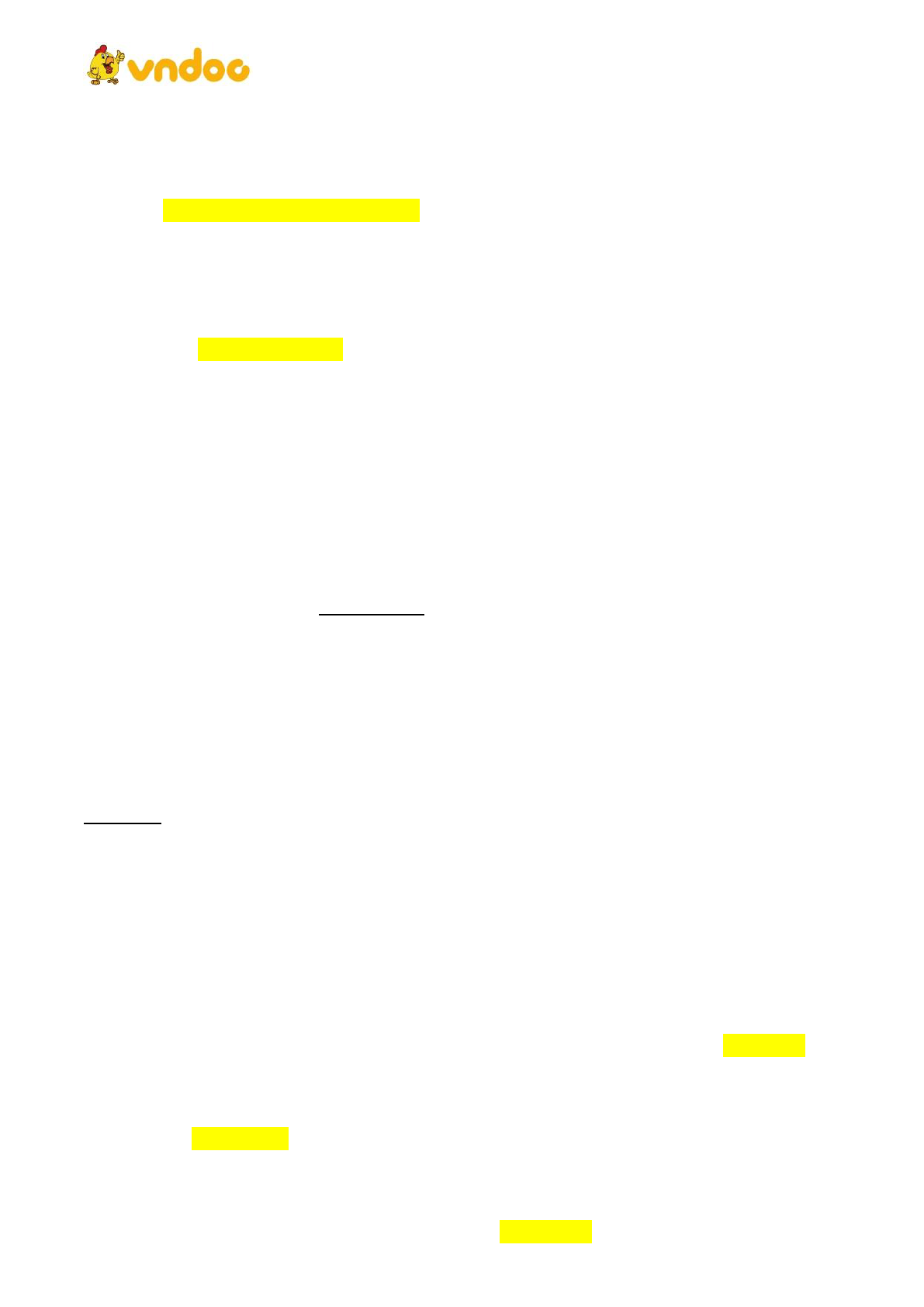 VnDoc - Tải tài liệu, văn bản pháp luật, biểu mẫu miễn phí
Mark the letter A, B, C, or D on your answer sheet to indicate the sentence that best
combines each pair of sentences in the following questions.
Question 29: We had prepared everything carefully for the party. Few guests came.
A. In spite of having prepared everything for the party carefully, few guests came.
B. Despite our careful preparation for the party, few guests came.
C. Although everything for party prepared carefully, few guests came.
D. However few guests came, we had prepared everything for the party carefully.
Question 30: She could dress herself when she was 3. She remembers this.
A. She remembers having dressed herself when she was 3.
B. She remembers having herself dressed when she was 3.
C. She remembers being able to dress herself when she was 3.
D. She remembers to dress for herself at 3.
Read the following passage and mark the letter A, B, C, or D on your answer sheet to
indicate the correct answer to each of the questions from 31 to 37.
THE HUMAN SCARECROW
Being told to bring a deckchair and a good book for the first day in a new job might
not be the kind of advice you’d expect to receive from your new boss, but that’s exactly the
advice Jamie Fox was given when he took up a post to help out a local farmer.
Fox, twenty-two, a music graduate from Bangor University, uses a range of musical
instruments to scare off partridges that have been destroying crops because ordinary
scarecrows don’t quite seem up to the job. Despite working from 7.30 a.m. to 4.00 p.m. for a
minimum wage, Fox, who is saving up to finance a trip to New Zealand, is quite content with
his unique position. Indeed, he’d much rather be out in the open air reading and playing
instruments, he says, and time passes much quicker than sitting at home doing nothing and
claiming unemployment benefit.
Fox can do anything he likes to pass the time. As well as playing musical instruments
and reading to relieve the monotony, other perks of the job include doing Sudoku puzzles,
observing the wildlife and daydreaming. He does, however, need to get out of the comfort of
his chair occasionally to scare the partridges off the fields. And although the work is far from
lucrative, some of Jamie’s friends, including those with more generously paid jobs, are
reportedly envious of his position and the fact that he spends the best part of the day doing
largely as he pleases.
His employer, farmer William Youngs, claims that he was forced to take someone on
as a human scarecrow after the partridges didn’t respond to more traditional methods of
frightening them away. Since losing thirty acres worth of crops to the birds at a cost of
thousands of pounds, Youngs has tried a variety of approaches to protect his livelihood.
Now, however, he is happy with the solution and claims that Jamie’s presence in the fields is
proving very effective and making a real difference.
Question 31: Jamie Fox’s plans include________
A. becoming a farmer. B. earning more money. C. joining a band. D. travelling
abroad.
Question 32: What is true about Jamie’s job?
A. He gets uncomfortable. B. He doesn’t need to move.
C. He makes a lot of noise. D. He has replaced another person.
Question 33: Mr Youngs decided to employ Jamie because________
A. he can pay him a low wage. B. he wants to help with the problem of
unemployment
C. he considered Jamie a good worker. D. he lost lots of crops previously.